MPOV: War for the Planet of the Apes 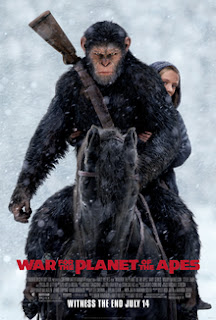 Some time after the U.S. military was called to fight off an increasingly intelligent and dangerous army of apes, the apes' clan, led by the chimpanzee Caesar, is attacked by a military faction known as Alpha-Omega. Caesar's clan hides in Muir Woods, and Caesar offers the humans peace if the apes are left alone. This conflict has become further complicated as various apes, including the gorilla Red (a former follower of Koba, who previously led a failed coup against Caesar), have joined Alpha-Omega after being disillusioned with Caesar's leadership and out of fear of retaliation from Caesar due to their betrayal. Learning that Alpha-Omega follows the leadership of a mysterious Colonel, Caesar makes plans to relocate the clan across the desert, not wanting to suffer any more ape casualties after Koba's wrath on San Francisco. The night before their journey, Alpha-Omega launches an assault on the ape home and Caesar's wife Cornelia and their eldest son Blue Eyes are slaughtered by the Colonel, leaving only Caesar's youngest son Cornelius alive.

Leaving Cornelius in the care of Lake, the mate of the late Blue Eyes, Caesar departs to confront the Colonel. He is accompanied only by Maurice the orangutan, Luca the gorilla and Rocket the chimpanzee, while the other apes head for the desert. Confronting traitorous albino gorilla Winter, they learn that the Colonel has departed for a location called the "border". The group is forced to silence Winter by asphyxiating him, which causes Caesar to worry he is becoming like Koba. During their journey, they are forced to kill a human living alone in an abandoned village, but when they discover his young daughter, apparently unable to speak, Maurice insists that they take her with them. Further along, they discover some Alpha-Omega soldiers that have been shot and abandoned. Their examination of a survivor reveals that he, like the girl, cannot speak. In an abandoned souvenir shop, the group meets Bad Ape, a chimpanzee hermit who lived in the Sierra Zoo before he was exposed to the Simian Flu virus. Bad Ape is able to direct them to the border, a former weapons depot that was turned into a containment facility when the virus began to spread.

When the group arrives at the border facility, Luca is killed by an Alpha-Omega patrol, prompting Caesar to enter the facility alone. However, he is captured shortly after learning that the rest of his ape clan have been caught by the Colonel. Witnessing his fellow apes being forced to build a wall with no food or water, Caesar confronts the Colonel, who reveals that the Simian Flu virus has evolved further and is now causing some surviving humans to become mute and regress back to a primitive mentality. The Colonel barricades himself into the facility to fend off rival military forces coming to execute him, as he favors killing any infected humans – including his own son – while others believe that a cure is still possible. At the labor camp Caesar is threatened by the Colonel with his life to persuade the apes to keep working. Lake intervenes, encouraging the other apes to get back to work in order to spare Caesar.

During an interview with MTV News in mid-November 2014, Andy Serkis talked about possible sequels: "It might be three films, it could be four. It could be five. Who knows? The journey will continue." In October 2016, it was announced that a fourth Planet of the Apes film is being planned.

This is by far the most realistic and relevant movie, totally resonates with me. With the incredible computer graphics and engaging plots, the movie transcends to various locations smoothly with an impressive casts especially the little mute girl acted by Amiah Miller. I was so taken into the movie, with the cinema so cold that I felt I'm in the movie too! LOL! With the addition of funny Bad Ape, there was a little of everything in this movie which was enthralling! Apparently the fourth film is being planned so I can't wait to see what's next since Caesar has passed on.

FYI, while watching the movie, there were a couple of monkeys at the back of the cinema who were sarcastic of some scenes involving the apes. Honestly, if you are not favourable of such movie, please don't watch it then and made an arse of yourself! Damn noisy lot of hooligans!