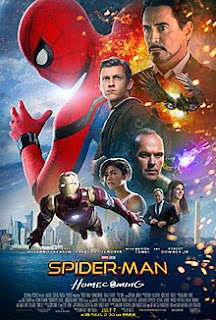 
Following the Battle of New York, Adrian Toomes and his salvage company were contracted to clean up the city, but their operation was quickly taken over by Tony Stark's U.S. Department of Damage Control (D.O.D.C.). Enraged at being driven out of business, Toomes persuades his employees to keep the Chitauri technology they already scavenged and use it to create advanced weapons to sell on the black market. Eight years later, Peter Parker is drafted into the Avengers by Stark to help with an internal dispute, but resumes his studies afterwards when Stark tells him he is not yet ready to become a full Avenger.

Parker quits Midtown School of Science and Technology's academic decathlon team so he can spend more time focusing on "the Stark internship", which is a cover for his crime-fighting activities as Spider-Man. One night, after preventing criminals from robbing an ATM with their advanced weapons from Toomes, Parker returns to his Queens apartment where his best friend Ned accidentally discovers his secret identity. On another night, Parker comes across Toomes' associates Jackson Brice / Shocker and Herman Schultz selling weapons to local criminal Aaron Davis. Parker nearly drowns intervening, and is rescued by Stark, who is monitoring the Spider-Man suit he gave Parker. Angry at Brice for jeopardizing the operation, Toomes accidentally kills him, and Schultz becomes the new Shocker.

Parker and Ned study a weapon left behind by Brice, removing its power core. When a tracking device on Schultz leads to Maryland, Parker rejoins the decathlon team and accompanies them to Washington, D.C. for their national tournament. Ned and Parker disable the tracker Stark implanted in the Spider-Man suit, and unlock all of it's features. Parker tries to stop Toomes from stealing weapons from a D.O.D.C. truck, but is overpowered and trapped inside the truck, causing him to miss the decathlon tournament. When he discovers that the power core is an unstable Chitauri grenade, Parker races to the Washington Monument where the core explodes and traps Ned and their friends in an elevator. Evading local authorities, Parker saves his friends, including his fellow classmate and crush Liz.

Firstly, I watched this movie in Bangkok. SF World Cinema was huge and it definitely has a very nice cinematic experience. Their seats were cool too especially since it will automatically leaned backwards once seated! Their patrons were by far more civilized and educated than humans in Malaysia! When the movie starts, all devices cleared, no one talks through the movie and no one shakes their legs/ kicks behind our seats! How cool is that?! Anyway, back to the movie.

Tom Holland definitely worked his butt off and portrayed Peter Parker/ Spider-Man so well! It sure fits like a glove... way better than Tobey Maguire and Andrew Garfield. The way he blended in the movie was way cooler and more realistic... not as woody nor stick-like. The overall movie was awesome and exciting with many cool CGI flicks, not forgetting the villain... Michael Keaton has shed his previous Batman stigma and really felt more like Vulture. With Robert Downey JR breezing through as Tony Stark/ Iron Man, it sure made the movie more Avengers like... grooming it for the next Avengers sequel LOL! Definitely another fantastic Marvel movie to look forward to next!

By the way, there are 2 post credit scenes - 1 midway and another right at the end. Also the next sequel is coming in mid 2019.
Email ThisBlogThis!Share to TwitterShare to FacebookShare to Pinterest
Sections: Movies