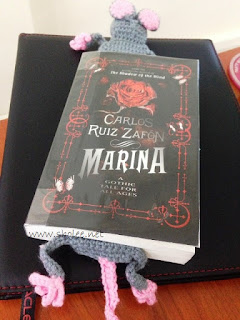 In May 1980, fifteen-year-old Oscar Drai vanishes from his boarding school in Barcelona. For seven days and nights, no one knows his whereabouts....

His story begins when he meets the mysterious Marina, the daughter of a reclusive painter. She takes him to a graveyard where they witness a macabre ritual. On the last Sunday of every month, a woman shrouded in black walks over to a gravestone that bears no name, only the emblem of a black butterfly.

When Oscar and Marina decide to follow her, they begin a journey that takes them to the heart of a forgotten, post-war Barcelona. Beneath the streets a dark secret lies waiting

My first CRZ and he has left me breathless! This book is by far one of the best I've read this year! It was a gift from a book club member, Romil, and thanks to him, I've discovered another favourable author!

I can totally imagine myself watching from afar how the protagonist, Oscar, led an adventurous life from the moment he met Marina. It was such an honest experience, a beautiful friendship detailed from the get go until the last breath. It was harrowing and sad at times, scary and gory at others, overall, it had me piqued with interests and can't wait to finish the book.

Though it's for young adults, it has elements more for the adults with all those gory details of dead bodies, unorthodox medical experiments, etc which somehow reminded me of Frankenstein with a mixture of Jekyll & Hyde and Chucky! All those horrors! Thankfully, this book may be Gothic but not as scary. I still can tahan lah!

The plots itself were quite relatable though it's set in the 80's with the vintage Barcelona in mind. Incorporating Lakme by Delibes had me thinking of operas with all those beautiful costumes ala Phantom of the Opera. Honestly, my imagination went wild in this book, all kinds of pictures drawn in mind as though I'm a part of it or perhaps, I'm the narrator. It may not be as predictable but by page 72, I had concluded that it was Marina who's ill and not her father, German. Nothing biggie but it kept churning in my mind how the ending will turn out. I had the urge to flip to the end to find out!

As it turned out, though set in the 80's, I kept imagining it's setting similarly to Dracula or Victor Frankenstein... not sure why... LOL! Anyway, the love between Mijail and Eva... their daughter Maria... Claret's and Dr Shelley's loyalty... finally with such ending... so dramatically twisted and harrowing... I let out a huge sigh once I've finished it.

Some heart-wrenching quotes which I had never expected from a male author:
Mijail was never a criminal or a fraudster. Mijail was simply a man who thought his destiny was to cheat death before death cheated him.

'The illness that took her mother away...' German murmured 'is taking her away, Oscar, my friend. It's taking my Marina away...'

I wanted to savour every hour and every minute I had left by her side. We'd spend hours hugging each other without saying a word, without moving. One night, it was Thursday, Marina kissed my lips and whispered in my ear that she loved me and that, whatever happened, she would always love me.

Some new words:
Nihilist - a person who believes that life is meaningless and rejects all religious and moral principles
Miscreant - a person who behaves badly or in a way that breaks the law
Teufel - it means devil in German; the black butterfly with open wings
Email ThisBlogThis!Share to TwitterShare to FacebookShare to Pinterest
Sections: Books