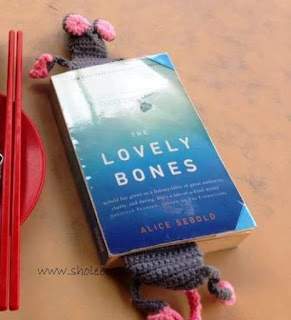 The Lovely Bones is the story of a family devastated by a gruesome murder -- a murder recounted by the teenage victim. Upsetting, you say? Remarkably, first-time novelist Alice Sebold takes this difficult material and delivers a compelling and accomplished exploration of a fractured family's need for peace and closure.

The details of the crime are laid out in the first few pages: from her vantage point in heaven, Susie Salmon describes how she was confronted by the murderer one December afternoon on her way home from school. Lured into an underground hiding place, she was raped and killed. But what the reader knows, her family does not. Anxiously, we keep vigil with Susie, aching for her grieving family, desperate for the killer to be found and punished.

Sebold creates a heaven that's calm and comforting, a place whose residents can have whatever they enjoyed when they were alive -- and then some. But Susie isn't ready to release her hold on life just yet, and she intensely watches her family and friends as they struggle to cope with a reality in which she is no longer a part. To her great credit, Sebold has shaped one of the most loving and sympathetic fathers in contemporary literature.

This is definitely an engaging book from the start, baffling me midway and ended in an unsatisfying manner! I had never read anything like it and it was totally refreshing! It was unexpectedly a good book. It even has a few popular literature's mentioned such as The Bell Jar, James & the Giant Peach and To Kill a Mockingbird. Not forgetting some gardening tips like coffee grounds and eggshells as fertilizers LOL!

Through it's narrator, Susie Salmon, the first chapter itself had me gagged and gave me the chills. How she had relived her rape and murder was so harrowing, dark and intense. She knew then she shouldn't have followed Mr. Harvey and all... a good book for teenagers I must say, as a great example of simply trusting and following a stranger and listening to your instincts.

After that, it did feel slow but I get it. Susie wanted to share how her family had struggled, coped with her death and strive to move on after... also how she has adapted in her Heaven whilst overlooking the Earth. It's comforting for Susie to have known of a few good friends too and over the many years... what her death has lead to and then slowly dissipated from everyone's mind...

I had expected closure with the killer caught or her body found but nothing of such had happened in the end! Totally unexpected the ending to be different. Even when Susie had the chance to reveal where her body was or where the killer had been but instead, she has opted to be with Ray Singh. I was like WTF?! Then it had to end as it is... I wasn't satisfied thinking not another cold case! How Susie's mother coped in a sinful way, moving apart from her father and her sister's denial, Alice Sebold sure knows how to weave the story well with all it's relevance. Weird plot as it is and had me mind-boggling yet an amazing book!


A memorable quote which caught my attention:
"I knew he was going to kill me. I did not realize then that I was an animal already dying."

A few new words:
Finial - a distinctive ornament at the apex of a roof, pinnacle, canopy or a similar structure in a building
Otatorio - no definition found - Royal Otatorio Society?
Schizoid - denoting or having a personality type characterized by emotional aloofness and solitary habits

I have not watched the movie so most likely I'll not watched it. Just didn't want it to spoil the fissure of a great book. It sure is mind blowing for me!
Email ThisBlogThis!Share to TwitterShare to FacebookShare to Pinterest
Sections: Books