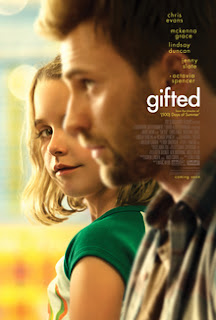 In a small town near Tampa, seven-year-old Mary Adler shows remarkable mathematical talent on her first day of first grade, which impresses her teacher, Bonnie Stevenson. Mary is offered a scholarship to a private school for gifted children. However, her uncle and de facto guardian, Frank, turns it down. Based on his family's experiences with similar schools, he fears Mary will not have a chance at a "normal" childhood.

It emerges that Mary's mother, Diane, had been a promising mathematician, dedicated to the Navier–Stokes problem (one of the unsolved Millennium Prize Problems) before taking her own life when Mary was six months old. Mary has lived with Frank ever since.

Frank's estranged mother and Mary's maternal grandmother, Evelyn, seeks to gain custody of Mary and move her to Massachusetts, believing that Mary is a "one-in-a-billion" mathematical prodigy who should be specially tutored in preparation for a life devoted to mathematics. However, Frank is adamant that his sister would want Mary to be in a normal public school and have the childhood she didn't have. Worried that the judge will rule against him and he will lose Mary completely, Frank accepts a compromise brokered by his lawyer Greg Cullen that sees Mary placed in foster care and attend the private school where Evelyn wants to have her enrolled. The foster parents live just 25 minutes from Frank's home, Frank will be entitled to scheduled visits, and Mary will be able to decide where she wants to live after her 12th birthday.

A touching, vulnerable, sensitive movie of a young, intelligent, gifted girl who has been brought up by her uncle after her mother committed suicide. It's simple plots with a charismatic protagonist brought the movie to a whole new level, so into it from the start to the end.

Mckenna, though young, definitely lights up the whole movie! She's such a natural, talented actress who portrayed Mary to the nines! She even outshines the handsome Chris Evans! It's one of those movies with thin plots but projected out beautifully thus engaging the audience from the get-go. Not as sob-worthy as I would have thought and it's quite predictable but with closure-worthy ending.

Do stand-by your box of tissue if you are going to watch this movie ya...
Email ThisBlogThis!Share to TwitterShare to FacebookShare to Pinterest
Sections: Movies