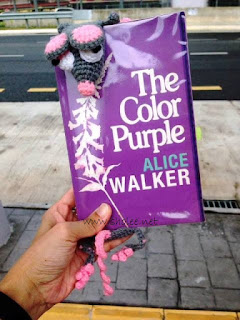 The Color Purple is a 1982 epistolary novel by American author Alice Walker which won the 1983 Pulitzer Prize for Fiction and the National Book Award for Fiction. It was later adapted into a film and musical of the same name.

Taking place mostly in rural Georgia, the story focuses on the life of women of color in the southern United States in the 1930s, addressing numerous issues including their exceedingly low position in American social culture. The novel has been the frequent target of censors and appears on the American Library Association list of the 100 Most Frequently Challenged Books of 2000-2009 at number seventeen because of the sometimes explicit content, particularly in terms of violence.

I have never watched the movie before but I do know Oprah Winfrey acted in and won some accolades. It was highly raved about, both movie and book, so I was obviously curious. Though I have acquired the book much earlier, I didn't read it until recently when it fell on my head 0.0 Well, lets just say my 'TBR' piles were bursting at the door lah!

After finishing the book, I wonder why I have never thought of reading it first! Written in letter format, it was truly engaging and filled with many emotional dialogues. It took me awhile to digress Celie's letter as her spellings were off and her slang was a little harder to grasp. Nettie's was easier since she's educated. Nevertheless, it was definitely heart wrenching reading their letters to each other, both sides having suffered when they were young and separated due to some unethical people.

So many important social stigmas in this book like apartheid, incest, statutory rape, physical abuse, feminism, lesbianism, egoism, adultery, etc... all these were way before then and Alice has already started writing about it. It has come a long way since with more awareness of each and every issue especially betterment of the law to protect the young and innocent.

There were so many markers after finishing the book but 2 quotes which maketh a mark for me, really got to my bones and my mind, making me tearing:

"He beat me like he beat the children. Cept he don't never hardly beat them. He say, Celie, git the belt. The children be outside the room peeking through the cracks. It all I can do not to cry. I make myself wood."

"After two days it became clear that Tashi was deliberately hiding. Her friends said while we were away she'd undergone both the facial scarification ceremony and the rite of female initiation."

It sure feels like a miracle upon finishing this book... for Celie that is. Positivism motivated and having faith in God... when the going gets tough, the tough gets going and everything will turn out right... like a motivational book wrapped up in fiction LOL!

Overall, a very good book which I've truly enjoyed and loved that it was written with ease. Alice Walker is an exceptional story teller. Can't wait to explore her other novels and perhaps finally watching the movie.
Email ThisBlogThis!Share to TwitterShare to FacebookShare to Pinterest
Sections: Books