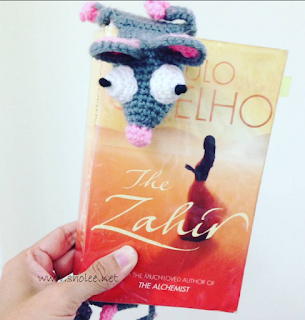 The narrator of The Zahir is a bestselling novelist who lives in Paris and enjoys all the privileges money and celebrity bring. His wife of ten years, Esther, is a war correspondent who has disappeared along with a friend, Mikhail, who may or may not be her lover.

Was Esther kidnapped, murdered, or did she simply escape a marriage that left her unfulfilled? The narrator doesn’t have any answers, but he has plenty of questions of his own. Then one day Mikhail finds the narrator and promises to reunite him with his wife. In his attempt to recapture a lost love, the narrator discovers something unexpected about himself.

Love lost, self-discovery, love found... with spiritual guidance and extra-marital affairs... this book had me thinking it's a semi-biography. I can't understand the relationship Esther had with the author as they lived a separate life and can only get together once in a while. When apart, they enjoy their lives individually and even have extra-marital affairs without hurting each other. It sounds modern but in the end they are hurting inside which led to Esther leaving the author suddenly.

All in all, there were a few quotes which I've picked up that reflected the story itself:

All I know is that even though I can live without her, I would still like to see her again, to say what I never said when we were together: I love you more than I love myself.

By knowing myself better, by finding out what had changed and what had provoked this sudden break in a road that had always been marked by joy.

Well, in summary, the author has taken his wife for granted and never had time or showed interest in whatever she was doing or going through. He concluded that he has given her the ultimate freedom but in actual fact he has deprived her of his attention and love as a husband. Instead, he has been having discreet affairs with other women. In a relationship, we truly require 2 hands to clap to make it work but Esther has been clapping one sided. So she has left abruptly, leaving breadcrumbs so that her husband finally opened his eyes and realised what has happened. Of course, it took him awhile to realise it and with some spiritual guidance, he found her... but she's pregnant with another man's baby LOL! This I find hilarious... Karma got to him in my opinion!

Okay, sarcasm aside, the plots were more centred on the author, of his affairs, of his actions and beliefs... kinda long winded and finally, discovery of his own true self after letting go of the past. Quite an ego he has plus he still has the time to indulge in women even though he has a missing wife. Well, his actions were not like a man who has lost his wife hence my disillusioned and unappreciative summary above.

It may sound like a hate review but it's not. Perhaps I just don't get it but it has ruffled some feathers hence a slightly better rating for getting me emotionally riled up. After this book, I can safely say that Paulo Coelho's prose is not my cup of tea. Not sure if it's lost in translation or the spirituality of the plots were not in my favour but I was practically flipping through the pages and hoping to reach the last chapter, the conclusion ASAP. I just felt the fillers in the middle were just nonsensical LOL!
Email ThisBlogThis!Share to TwitterShare to FacebookShare to Pinterest
Sections: Books