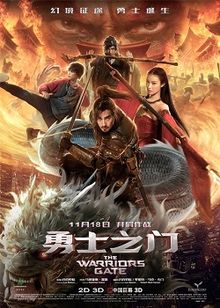 A teenager was transported to China in a magical way for a mission to accomplish by saving the princess from danger. He transforms himself into a Kung Fu warrior to battle the evil villains by converting his video game skills.

I honestly thought this is a Chinese movie but instead it's actually English. Well, even the poster is in Chinese so you can't fault me here.

Overall, the movie felt unnatural, probably CGI was a little over and some of the plots were predictable. Also it wasn't as logical like when the ancient princess was able to speak English immediately. All in all, it's definitely another movie to watch at home, just for entertainment and nothing more.
Email ThisBlogThis!Share to TwitterShare to FacebookShare to Pinterest
Sections: Movies