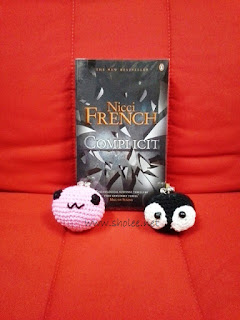 Bonnie Graham is standing in a room belonging to a friend. At her feet is a corpse, straddled in a spreading pool of blood. The questions are numerous: who is responsible for the dead body on the floor? What does she, Bonnie, have to do with it? And what is her next course of action? This opening premise gives some idea of just how quickly (and comprehensively) Nicci French is able to transfix the reader. It is this combination of a shocking situation and the ill-advised, often self-destructive actions of the duo's protagonists which the authors pull off in book after book; we may disapprove of what French’s characters do in their extreme situations, but it's impossible not to identify with them. Bonnie is a music teacher, rehearsing through a sweltering summer in London with a band that is scheduled to play at a wedding. Any pleasure the experience might have afforded is to evaporate as bitter internecine divisions within the band make themselves felt, and sexual involvements move in particularly murderous directions. This is typical Nicci French fare -- and admirers will meet need no other recommendation. --Barry Forshaw

Complicit: (adjective) involved with others in an illegal activity or wrongdoing.

I've always enjoyed Nicci French's books so I would not have expected less of this. However, it was a little hard to go by the first few chapters, kinda slow and felt like it was dragging on. Also toggling between before and after got me confused at some point which I found to be irrelevant at times and had me flipping through much of the time. Though the 'plot outcome' came towards the end but so sad that it was without the element of surprise at all. It felt more like filling in the gaps of the story, as if to thicken the plots but to no avail. Sad but true.

It did grabbed my attention in wanting to find out the actual killer...
Pg. 49 - Was it Bonnie? Rough sex gone wrong?
Pg. 313 - Was it Richard due to jealousy? Or was it Guy as he disallowed the bad influence Hayden had on Joakim?

All in all, it was not as good as Killing Me Softly which had me on my toes and biting my nails!
Email ThisBlogThis!Share to TwitterShare to FacebookShare to Pinterest
Sections: Books