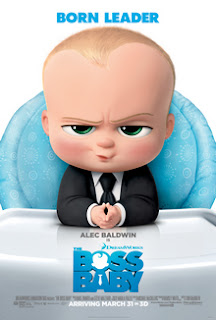 A man named Timothy Templeton (Tobey Maguire) tells a story through his imaginative point of view as his 7-year-old self (Miles Bakshi) who lives his days having fun with his parents, Ted (Jimmy Kimmel) and Janice (Lisa Kudrow), and wishes it to be just the three of them forever. While tucking Tim in bed one night his parents ask if he wanted a baby brother; Tim declines the offer, saying that he is enough. After he goes to sleep, we see that Janice is pregnant.

While sleeping Tim begins to wonder where babies come from. One day, Tim is surprised when a business suit-wearing infant shows up in a taxi at his house, and Ted and Janice proudly call him Tim's little brother. Tim is envious of the attention the baby is receiving, not to mention suspicious when the infant acts odd around him, but his parents, being blind to the baby's eccentric behavior, try to convince him that they will grow to love each other.

Soon, Tim learns that the baby can talk like an adult (Alec Baldwin) and he introduces himself as "The Boss". Seeing an opportunity to be rid of him, Tim decides to record a conversation between him and other toddlers who are over at Tim's house for a meeting (under the guise of a playdate by the parents) to do something about how puppies are receiving more love than babies. The Boss Baby and the other infants catch Tim with the recording and after a chase scene throughout the backyard and the house, the tape is terminated after The Boss Baby threatens to tear up Tim's favorite stuffed animal, Lam-Lam. With no evidence to support him, Tim is subsequently grounded by his parents for his actions during the chase between him and the infants, much to Tim and even Boss Baby's dismay.

Initially, I wasn't into it when I first saw the poster but then Angels had to watched it and so did I. Honestly, it was funny, cute, sad, emotional, unruly, bossy all in one! I guess life should be as it is and we shouldn't change mother nature like producing babies to be trained to act and talk like adults. Babies are babies, to be cooed and dote on... those adorable innocent beings LOL. Truly an entertaining baby animation to watch with the family.
Email ThisBlogThis!Share to TwitterShare to FacebookShare to Pinterest
Sections: Movies