MPOV: The Book Of Lost Things 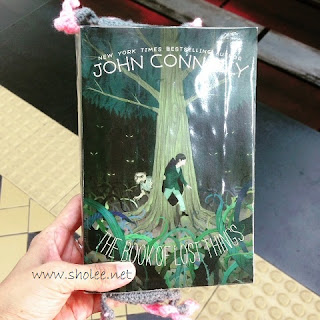 High in his attic bedroom, twelve-year-old David mourns the death of his mother, with only the books on his shelf for company. But those books have begun to whisper to him in the darkness. Angry and alone, he takes refuge in his imagination and soon finds that reality and fantasy have begun to meld. While his family falls apart around him, David is violently propelled into a world that is a strange reflection of his own -- populated by heroes and monsters and ruled by a faded king who keeps his secrets in a mysterious book, The Book of Lost Things.

Taking readers on a vivid journey through the loss of innocence into adulthood and beyond, New York Times bestselling author John Connolly tells a dark and compelling tale that reminds us of the enduring power of stories in our lives.

Overall, it was an enjoyable read as it ranged from family drama to dark fairytale to happy ever after. My first Connolly book as it was highly recommended by the book club (KLBAC) I was in and it definitely surprised me. I would have thought it's a children's book but then the intensity and darkness of the story is definitely not for the young innocent minds.

This book started off innocently with David having to mourn his mother's death and then accepting a new step-mother at a later stage while contemplating a shadow of a crooked man in his room. Slowly the story progressed into a darker fantasy when David finally left for the secret garden where he ventured into the unknown. Here in the alter world, he met a kind Woodsman, a gallant Roland plus many evil animals where the tale took off in a scary and gory insights.

Carefully plotted, John knows how to weave a very engaging story, keeping me interested with the ins and outs of the various subjects. Though the pace was slow at first, it did picked up but ended too fast. It was like the ending was compressed and quickly stopped at where was required LOL. Other than that, it's a good book to read especially for the young adults.
Email ThisBlogThis!Share to TwitterShare to FacebookShare to Pinterest
Sections: Books