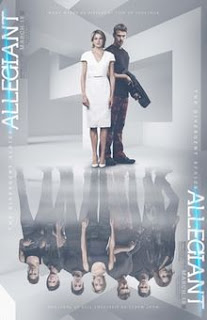 Many Chicago citizens run toward the wall, but soldiers under Evelyn (Naomi Watts) are told to shut down the perimeter, and thus, no one is allowed through. Evelyn directs Jack Kang (Daniel Dae Kim) of Candor to hold trials for the Erudite and Dauntless conspirators, in which a number of them become executions, starting with Max (Mekhi Phifer). Evelyn and Johanna (Octavia Spencer) attempt to pressure Tris (Shailene Woodley) and Four (Theo James) into taking leadership positions in the new world order but both refuse. After seeing that the hostile situation within the city is only going to get worse, Tris escapes with Four, Caleb (Ansel Elgort), Christina (Zoë Kravitz), Tori (Maggie Q), and Peter (Miles Teller) to journey beyond the wall that encloses Chicago. However, Tori is killed by Edgar (Jonny Weston) in the attempt.

The group is ambushed by Edgar, who is later disabled by an armed group of individuals and airships. The soldiers take the group to the Bureau of Genetic Welfare, a highly advanced city where they learn that years ago the government believed that society's problems were caused by "damaged genes". In an attempt to create a better society, they began to modify people's genes, with disastrous results. The government set up "experiments" in an attempt to repair this mistake, establishing isolated cities across the remains of the United States. The hope is to raise enough genetically pure Divergent individuals to fix the "genetic damage" left in the wake of the Purity War.

Tris and Four are tested by Matthew (Bill Skarsgård) and Nita (Nadia Hilker) to verify and study their Divergence. Tris is shown to be truly Divergent, but Four's genetic structure indicates that his genes are still "damaged". Caleb and Peter are assigned to surveillance teams that monitor Chicago. Matthew then brings Tris to the leader of the Bureau, David (Jeff Daniels). David gives Tris a device that allows her to view her mother's memories, and sees that her mother was rescued and adopted by the Bureau before volunteering to join the Chicago experiment out of dedication to the project. In return for his help in restoring peace to Chicago, Tris agrees to help David, who claims that only the council he reports to have the power to intervene.

This is the final movie adapted from Veronica Roth's Divergent trilogy. I did watched the first, Divergent, and it was the best of the lot. I think I've only watched Insurgent midway as I fell asleep *grinning unabashedly*

So this one was slightly better with more actions that I managed to watch till the end. It was rather slow, lukewarm at times and the ending was predictable. Nothing exciting about the movie, sorry Divergent fans. To be honest, I find that dystopian type of movie is just not my cup of tea thus far.
Email ThisBlogThis!Share to TwitterShare to FacebookShare to Pinterest
Sections: Movies