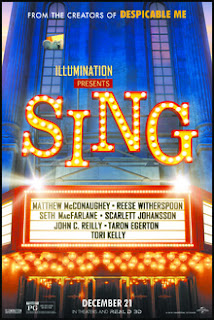 
In a world of anthropomorphic animals, koala Buster Moon owns a theater, having been interested in show business since his father took him to his first music show as a child. Following financial problems brought up by the bank representative Judith, he tells his wealthy friend Eddie Noodleman that he will host a singing competition with a prize of $1,000. But Buster's assistant, Ms. Crawley, accidentally appends two extra zeroes, and the promotional fliers showing $100,000 are blown out of Buster's office into the city streets.

Animals from all around the city gather for auditions. Those selected include: housewife and mother of 25 piglets Rosita; street musician mouse Mike; mobster's son gorilla Johnny; and punk-rock porcupine Ash. Shy teenage elephant Meena bombs her audition out of stage fright, while Ash's boyfriend Lance is dismissed from the contest. Rosita is paired with another contestant, an exuberant pig named Gunther, for a dancing routine. Although Buster discovers the flyers show a prize of $100,000, money he does not have, he remains optimistic. Buster convinces Eddie to arrange a visit with Eddie's grandmother, former opera singer and theater actress Nana Noodleman, to persuade her to sponsor the prize money. She is hesitant to contribute, but agrees to see a private screening of the show.

Encouraged by her grandfather, Meena tries to ask Buster for another chance, but becomes his stage hand instead. When one of the acts quits, and another is injured, Meena is added as an act. The performers' individual problems begin to hinder rehearsals: Rosita flounders in her dance routine with Gunther, after having been distracted by her parenting duties that have fallen into disarray. After discovering Lance with a new girlfriend and evicting them from her apartment, Ash is heartbroken and in no state to sing her assigned song, Carly Rae Jepsen's "Call Me Maybe". Johnny is torn between having to help his father as the driver of the getaway car in a heist and making the practices. When Johnny tries to do both, he does not show up for the planned pickup, and his father and his gang are arrested. Meena does not get any help overcoming her stage fright, and Mike, certain that the prize money is as good as his, buys a fancy car to impress a girl mouse, and swindles a group of bears in a card game at a nightclub.

This animation is so out of this world! I totally enjoyed the singing, the songs, the cute casts and the funny plot! Highly recommended to watch this with the family... especially your children as it's awe-inspiring with good, positive message. It is never to old to dream so dream on and dream big!
Email ThisBlogThis!Share to TwitterShare to FacebookShare to Pinterest
Sections: Movies