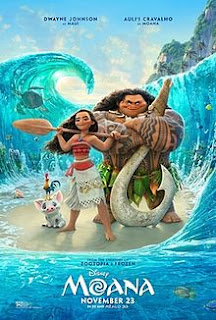 A small pounamu stone that is the mystical heart of the island goddess, Te Fiti, is stolen by the wind and sea demigod, Maui, who plans to give it to humanity as a gift. As Maui makes his escape, he is attacked by Te Ka, a lava demon of Earth and fire, causing his power-granting magical fishhook and the heart of Te Fiti to be lost in the ocean.

A millennium later, Moana, daughter and heir of the chief on the small Polynesian island of Motunui, is chosen by the ocean to receive the heart, but drops it when her father, Tui comes to get her. He insists the island provides everything the villagers need. Years later, a blight strikes the island as fish become scarce and the island's vegetation begins dying. Moana proposes going beyond the reef to find more fish. Tui rejects her request, claiming that sailing past the reef is forbidden.

Moana's grandmother, Tala, shows Moana a secret cave behind a waterfall where she finds boats inside and discovers her ancestors were voyagers, sailing and discovering new islands across the world. Tala explains that they stopped voyaging because Maui stole the heart of Te Fiti, causing monsters to appear in the ocean. Tala then says Te Ka's darkness has been spreading from island to island, slowly killing them. Tala returns the heart of Te Fiti to Moana, which she had recovered after Moana dropped it.

Overall, a very entertaining musical movie with a little bit of everything. Happy, sad, action, funny, sarcasm, etc! The best part, The Rock, can sing! Oh yes! I was delighted as I didn't know he could sing that well... LOL! Anyway, Moana did reminds me of Mulan... a female protagonist/ heroine/ saviour of her village. Although a little unrealistic for a little girl to travel alone in the high seas, it's just animation and definitely a story of a brave young girl with a mission to save her village. Anyhow, it's a warm-hearted movie to be watched with the family.
Email ThisBlogThis!Share to TwitterShare to FacebookShare to Pinterest
Sections: Movies