MPOV: Beauty and the Beast 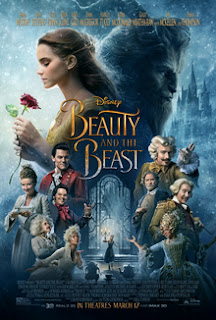 
Somewhere in Rococo-era France, an enchantress disguised as a beggar old woman arrives at a debutante ball and offers an enchanted rose to a prince in exchange for shelter from a storm, but he refuses. For his arrogance, the enchantress transforms him into a beast to match his inhumane character and the servants into inanimate objects, and erases the castle from the villagers' memories. She gives the Beast a magic mirror that shows faraway events. To break the spell, the prince must learn to love another and earn her love in return before the rose's last petal falls.

Years later during the 1780s, in the village of Villeneuve, a young woman, Belle, lives with her father Maurice, an artist and tinkerer. Gaston, a celebrated former soldier, seeks her hand in marriage, but she is repulsed by his arrogance and narcissism. On a trip to the market to sell music boxes, Maurice and his horse Philippe lose their way in the forest and are attacked by wolves. They seek refuge at the castle, only for Maurice to be imprisoned by the Beast as penance for taking a rose from the garden. When she realizes her father is missing, Belle ventures into the forest in search for him, and finds him in the castle. The Beast confronts her and accepts her offer to take her father's place.

Belle meets and befriends the servants in the castle. She eventually wanders into the forbidden west wing and finds the rose. The Beast, enraged, frightens Belle into fleeing into the woods. He rescues her from a pack of wolves but is injured during the fight. Belle assists him to the castle and nurses him back to health. A friendship develops, and the servants tell her she may be the one who can break the curse. The Beast develops feelings for Belle and allows her access to his library. However, Belle remains uncertain of her feelings due to her imprisonment. The Beast shows Belle a gift the enchantress gave him, a book that could take people wherever they wanted. Belle uses it to bring the Beast and herself to a small house in Paris, where she used to live with her parents as an infant. They see it is abandoned and old, and after finding a plague doctor mask, learn for the first time that she and her father were forced to leave her mother's deathbed as the latter succumbed to the plague.

Then... when I first watched the animated version in 1991, I was so taken by the story with the beautiful graphics and songs. I was so in love with it that I had a Walt Disney Studios' Exclusive Commemorative Lithograph!

And now... watching the movie version had me at an emotional high! I felt like crying, hugging, clapping, dancing... thank goodness I was in the cinema! I have fallen in love with 'Beauty and the Beast' again!

Emma Watson was the perfect Belle, so true, so real... I did wished I was in her shoes when she was in Beast's library! I would have swoon too with the amount of books in there! Dan Stevens, though most of the time in costume, was so real as the perfect Beast. The rest of the casts truly had me on my toes... the whole movie was so captivating... even the songs... I was so engrossed in the movie itself!

Honestly, with the current technology, it seemed so surreal. Everything was so magical yet so real. The best part, as always, had been when Belle and Beast dancing to the theme song 'Beauty and the Beast'. Not forgetting when Lumiere performed 'Be our guest' which was so enchanting too! There were just so many lovely moments that I think I shouldn't lists it or else it'll be a spoiler for you LOL!

Gosh! I could just continue and continue... or better not... go watch it for yourself! P/S this is a musical so if you are not a fan then please skip.

Tale as old as time... true as it can be... barely even friends... then somebody bends... unexpectedly.
Email ThisBlogThis!Share to TwitterShare to FacebookShare to Pinterest
Sections: Movies