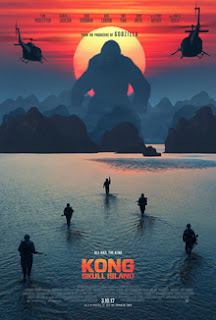 In 1944, during World War II, two fighter pilots—Hank Marlow and Gunpei Ikari—parachute onto an island in the South Pacific after a dogfight. They both engage in close combat, with Ikari gaining the upper hand. A large behemoth monster suddenly interrupts the fight, causing both soldiers to stare in shock and flee.

In 1973, former British Special Air Service Captain James Conrad is hired by U.S. government agent Bill Randa to guide an expedition to map out an island known as "Skull Island". Randa also recruits the Sky Devils, a Vietnam veteran helicopter squadron led by Lieutenant Colonel Preston Packard and prominently made up of his right-hand, Major Jack Chapman and Captain Earl Cole to escort them to the island. The group is soon joined by pacifist photojournalist Mason Weaver, who plans to expose it, believing it's a secret military operation with dark purposes.

Arriving on Skull Island, Packard's men begin dropping explosives developed by seismologist Houston Brooks to determine if the ground is hollow, despite Conrad's objections. The helicopters are suddenly attacked by a 100 foot-tall bipedal ape known as "Kong", and many are destroyed, with the survivors split into two groups. The survivors' only hope for rescue is a resupply team that will meet them at the island's northern end in three days time. Randa reveals his affiliation to the secret government organization Monarch to Packard and the expedition's real purpose: to acquire proof of the existence of forgotten monsters, fearing that they may soon return to take back the world from humanity.

So, after so many remakes of King Kong, this one comes as no surprise... plots were similar to Jurassic Park + King Kong + Ultraman mesh-ups. However, the scenaries, the CGIs, the actions were truly enthralling and entertaining to watch. Not forgetting the fantastic casts especially Tom Hiddleston... gone were Loki days and totaly replaced by this current character, Conrad. Lots of brutal/ gory scenes this time around and the best part, one of the monsters reminded me of Miss Peregrine's Home of Peculiar Children's monster but in 2 legged form.

In summary, like most movies nowadays, it's about human's cruelty to mother nature, endangering the eco-system and sub-conciously killing the earth. So next, Godzilla vs Kong in 2020! Btw, there is a post credit trailer right at the end ya... relating to the sequel.
Email ThisBlogThis!Share to TwitterShare to FacebookShare to Pinterest
Sections: Movies