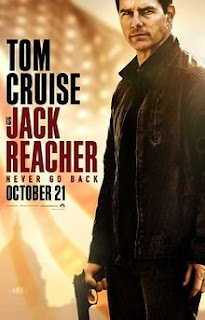 After dismantling a human trafficking ring, former military investigator turned vigilante drifter Jack Reacher returns to his old military headquarters to meet Major Susan Turner, whom he has been working with during his travels - only to learn from Colonel Sam Morgan that Turner has been accused of espionage and detained.

Turner's attorney, Colonel Bob Moorcroft, reveals that there is evidence that Turner is involved in the murders of two soldiers in Afghanistan, but Reacher believes she is being framed. Moorcroft also reveals an old acquaintance of Reacher, Candice Dutton, has filed a paternity suit against him, claiming he is the biological father of her 15-year-old daughter, Samantha Dutton. Reacher tried to reach out to Samantha, but she rebuffs him, believing he is after her biological mother due to her past as a prostitute.

Moorcroft is later killed by an unknown assassin. Reacher is framed for Moorcroft's murder and arrested and transported to the prison where Turner is being detained. An assassin arrives to kill her, but Reacher neutralizes him, rescues her and they escape to Morgan’s house, having deduced he is involved in the conspiracy, to extract information. After they leave, the assassin, revealed to be working with Morgan, kills Morgan and frames Reacher which he learns about from a friend, Sergeant Leach when he asks her to investigate a military contractor.

Surprisingly, this was adapted from a book by Lee Child. I have not read any of his books hence I didn't know of Jack Reacher LOL! Even Lee Child, the author, had a cameo role in this movie! All I can say is that the movie was engaging from the start to the end. It is a little refreshing to see more plots rather than just fighting scenes, making the overall movie more exciting to watch.
Email ThisBlogThis!Share to TwitterShare to FacebookShare to Pinterest
Sections: Movies