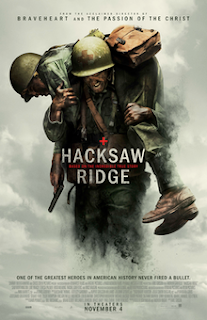 As a young boy, Desmond Doss nearly kills his younger brother Hal. This experience and his Seventh-day Adventist upbringing reinforce Desmond's belief in the commandment "Thou shalt not kill". Years later, Doss (Andrew Garfield) takes an injured man to the hospital and meets a nurse, Dorothy Schutte (Teresa Palmer). The two begin a relationship and Doss tells Dorothy of his interest in medical work.

At the outbreak of World War II, Doss is motivated to enlist in the Army and intends to serve as a combat medic. His father Tom (Hugo Weaving), a troubled World War I veteran, is deeply upset by the decision. Before leaving for Fort Jackson, he asks for Dorothy's hand in marriage and she accepts.

Doss is placed under the command of Sergeant Howell (Vince Vaughan). He excels physically but becomes an outcast among his fellow soldiers for refusing to handle a rifle and train on Saturdays. Howell and Captain Glover (Sam Worthington) attempt to discharge Doss for psychiatric reasons but fail. They subsequently torment Doss by putting him through grueling labor, intending to get Doss to leave of his own accord. Despite being beaten one night by his fellow soldiers, he refuses to identify his attackers and continues training.

Firstly, I was intrigued by the story line of a hero who went to war without a gun. Then I found out that it's quite gory. But then, it is a war movie so I guess it's part and parcel of such category. Though slow at the start, the movie progresses with great intent and the graphic details were truly realistic! So real that I had to look away lah when those gory parts came on. I liked the ending when they showed the real Desmond Doss and some of the other war veterans. Definitely a good movie to watch albeit a little towards Christianity and all. It's Desmond's believe so Amen to that. In the end, I was surprised that it was directed by Mel Gibson. Imagine that! Salud!
Email ThisBlogThis!Share to TwitterShare to FacebookShare to Pinterest
Sections: Movies