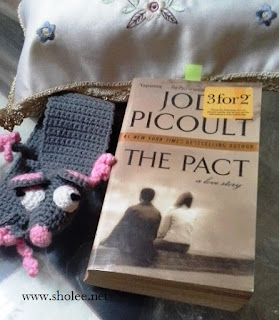 For eighteen years the Hartes and the Golds have lived next door to each other, sharing everything from Chinese food to chicken pox to carpool duty-- they've grown so close it seems they have always been a part of each other's lives. Parents and children alike have been best friends, so it's no surprise that in high school Chris and Emily's friendship blossoms into something more. They've been soul mates since they were born.

So when midnight calls from the hospital come in, no one is ready for the appalling truth: Emily is dead at seventeen from a gunshot wound to the head. There's a single unspent bullet in the gun that Chris took from his father's cabinet-- a bullet that Chris tells police he intended for himself. But a local detective has doubts about the suicide pact that Chris has described.

This was my first Jodi Picoult's read and I was definitely taken away by it. She wrote pretty well... without big, complicating words to get her story across. A straightforward plot but with lots of nitty gritty details which looks like Jodi totally dug through her research/ homework to make this story as real as it can be.

It was truly engaging for me, especially with so many important touch points... some which was stuck in my mind:
how the respective parents coped with each other's lost...
how Chris tried to deal with Emily's suicidal thoughts but in the end gave in and helped her instead...
how Chris survived in jail...
the revelation in court...
when Emily was finger raped, how she dealt with it...
OMG! It's supposed to be a love story but it's filled with so many heavy duty plots!

This book touches a very important topic in life... peer pressure suicide... which involved with lots of denials and ignorance. It was so realistic that I could imagined the plots itself and concluded that if her parents were not as such, Emily would not have been suicidal. She could have thought of the alternative given by her counsellor and still be alive... Chris would not be in jail and we would not have this book to read! LOL!

Definitely a page turner for me. A blissful yet heart wrenching love story with Emily being the selfish one and Chris being the willing one. Expectantly unexpected.
Email ThisBlogThis!Share to TwitterShare to FacebookShare to Pinterest
Sections: Books