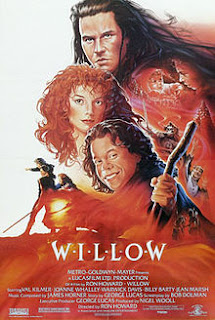 A prophecy states that a female child with a special birthmark will herald the downfall of the evil sorceress Queen Bavmorda. Bavmorda imprisons all pregnant women in her realm to prevent fulfilment of the prophecy. When the prophesied child Elora Danan is born, the mother begs the midwife to hide the infant and smuggle her to safety. The midwife reluctantly accepts and leaves Nockmaar castle unnoticed. The mother is executed, the midwife is hunted down and eventually found. Knowing she cannot escape, she sets the baby on a makeshift raft of grass and sends her down the river hoping for fate to run its course. The midwife is killed by Nockmaar hounds. Bavmorda is furious about the escape so summons her daughter Sorsha and her army's commander, General Kael to find the baby.

The baby drifts downriver to a village of little people, The Nelwyn. She comes into the care of Willow Ufgood, a kind farmer and conjurer who hopes to become a sorcerer; his wife Kiaya and his children fall in love with the baby immediately, and Willow too soon grows to love her as one of his own. During a town festival the village is attacked by a Nockmaar hound which is quickly killed by the village warriors. The High Aldwin, the village sorcerer, learns about the baby and selects Willow, due to his devotion to the child, to accompany a party of volunteers returning the baby to the Daikini (human) people. At a crossroads, they find a human warrior named Madmartigan trapped in a crow's cage. The rest of the party want to give the baby to Madmartigan and go home immediately, but Willow and his friend Meegosh refuse, so the others leave. After spending the night at the crossroads, and meeting an army led by Airk Thaughbaer, an old friend of Madmartigan's, marching against Bavmorda, Willow reluctantly decides to free Madmartigan so that he can take care of the baby for them.

Later on, the baby is stolen by a group of brownies. While chasing them, Willow and Meegosh are trapped, but rescued by Cherlindrea, a Fairy Queen, who identifies the baby as Elora Danan, the future princess of Tir Asleen and Bavmorda's bane, and assigns Willow the task of helping the baby fulfil her destiny. Willow sends Meegosh home, and two of the brownies, Franjean and Rool, are instructed to guide Willow to the sorceress Fin Raziel. The three of them later encounter Madmartigan at a tavern, where he is disguised as a woman to hide from Lug, a cuckolded husband, who then flirts with the disguised Madmartigan. Sorsha arrives and reveals his identity, and in the ensuing brawl started by the furious Lug upon realisation that Madmartigan is not a woman, Willow, Madmartigan and the brownies escape. Madmartigan guides them to a lake where Raziel lives, but departs again as they cross it.

Believe it or not, this is an old movie which I had not watched it yet. Anyway, since it's an old movie, the production also seemed unreal enough LOL! Though it lacked in special effects, it has an interesting story line which was entertaining enough for me. A warm movie to watch with the family.