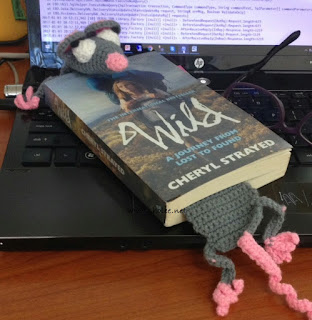 At twenty-two, Cheryl Strayed thought she had lost everything. In the wake of her mother’s death, her family scattered and her own marriage was soon destroyed. Four years later, with nothing more to lose, she made the most impulsive decision of her life. With no experience or training, driven only by blind will, she would hike more than a thousand miles of the Pacific Crest Trail from the Mojave Desert through California and Oregon to Washington State — and she would do it alone.

Told with suspense and style, sparkling with warmth and humor, Wild powerfully captures the terrors and pleasures of one young woman forging ahead against all odds on a journey that maddened, strengthened, and ultimately healed her.

The above summary taken from Goodreads. Goodreads rating: 3.95

At the start of this book, I actually loathed it. I speed read it mostly and only started liking it towards the end, after about 75% into the book. This book mainly centers on Cheryl Strayed's triumphant hike through the Pacific Crest Trail. She also reminisced of her late mom, ex-husband and boyfriends before and during this hiking trail. Plus her struggles with her inner demons and psychotic issues, sex and drug addictions after her mom has passed away.

I applaud Cheryl Strayed for sharing her inner demons in this book as it's not easy to reveal all the bad stuff to the world. People are judgemental so this can go either way. She definitely writes really well, descriptive with details yet with flair. So well that each ramblings she made of her own emotional meltdown felt like she's having a psychotic breakdown. IMHO, it sounded as though she's a self-centered bitch! She can just rambled on and on about it, especially her infidelities and insecurities. To be honest, it really sounded like she's boasting her issues instead. Sorry if I sounded judgemental here but this was how I felt while reading it.

It all started after her mom had passed away from cancer. I can totally relate to her emotional turmoil after her mother's death (FYI, my dad passed away too, a few years ago). However, I did not digress nor melt down nor hit rock bottom. I understand that different people will manage their mourning and sorrow differently. After a few months of confiding with my husband and friends, I was able to let it go and moved on with my life. Whatever it was, life has to go on as there are bills to be paid and children to be fed. It's the life's cycle. We are mature and responsible for our own life. I may sound crude here but it's as though she has been living a sheltered life. Thus when something bad happens, she hits rock bottom.

Anyway, back to the book, it's apt the cover captioned it "A journey from lost to found". This I truly agree as towards the end, I can sense her slowly... finally finding herself, filled with gratitude for everything and everyone. At the start, she wasn't even acknowledging she was battling her inner demons or addiction. Especially her sex and drug addiction, Cheryl mentioned it several times like it's a norm which I felt was TMI that got me irked up. It's misleading for the young ones who still can't identify which is right or wrong. In the end, they might not even reached the end of the book to understand the whole thing. What she wrote at the end makes more sense to me, honestly.

Obviously she's not as strong willed but strong enough to hike on her own and rediscovered herself. She definitely took a long route to finally reached where she wants to be, not only the trail but her self esteem and her self worthiness. I guess in the end, this was her own journey of mental and health discovery which she had to go through, the hard way. Not easy but she had shamelessly journal it in this book for which I truly applaud her. Also, I applaud her for hiking on her own, so daring, having the guts to do it. And here I am, bickering and condemning about it at the start LOL!

Here are some of her thoughts on her infidelities:
"My grief obliterated my ability to hold back"

"I was trying to heal. Trying to get the bad out of my system so I could be good again. To cure me of myself"

"Heroin had made me dumb and distant from myself. A thought would form and then evaporate. I could not quite get ahold of my mind, even when I wasn't high"

Her road to recovery, finally:
"I had to change was the thought that drove me in those months of planning. Not into a different person, but back to the person I used to be - strong and responsible, clear-eyed and driven, ethical and good"

This struck a chord for me, when Cheryl quoted her mother:
"I never got to be in the driver's seat of my own life", she'd wept to me once, in the days after she learned she was going to die. "I always did what someone else wanted me to do. I've always been someone's daughter or mother or wife. I've never just been me"

All in all, it's about her conquering PCT - lots of good tips especially for female hikers, a note on REI's special service and a shout out to the Rainbow Gathering at Toad Lake. If you are into such memoirs, then go ahead... this is just not my cup of tea. The worst part, she's been burning books all along her hike! Yikes! She did list it at the last few pages "Books burned on the PCT" with a total of 11 burnt sob sob!

New words:
Soliloquies - an act of speaking one's thoughts aloud when by oneself or regardless of any hearers, especially by a character in a play.

Dromedary - an Arabian one-humped camel, especially one of a light and swift breed trained for riding or racing.
Email ThisBlogThis!Share to TwitterShare to FacebookShare to Pinterest
Sections: Books