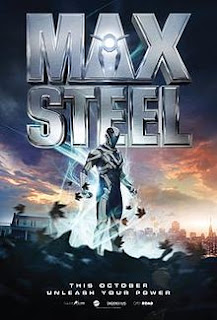 Max Steel is an in-depth "origin" story. The plot chronicles the adventures of teenage Max McGrath and alien companion Steel, who are symbiotically bonded and utilize a unique form of esoteric energy to become the turbo-charged superhero Max Steel. As these two unlikely friends struggle to accept their oddly connected fates, they begin to uncover unimaginable secrets, working together to find the truth, and fighting the mysterious forces threatening their world.

This is an odd and confusing movie. In summary, boy and mom shifted to a new place but boy seemed to be having odd, mental issues. After a while, boy met an alien and discovered the truth of his predicament plus his dad's death. Apparently, mom knew of this but never filled boy in. So in the end, the truth prevails, that's all. The overall cinematic feel was uninteresting for me.