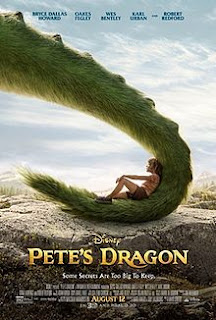 In 1977, Pete, a five-year-old boy, is on a road trip with his parents when their car flips off the road trying to avoid a deer. Pete’s parents are killed instantly, but Pete survives and is chased into the forest by a pack of wolves, only to be rescued by a dragon with green fur, yellow eyes, and huge wings. Pete names the dragon "Elliot" after his favorite book about a puppy of the same name with its family, and takes to him as a father figure.

Six years later, Pete, now 11, spots a lumberjack crew chopping down trees near his home. Natalie, the daughter of the site foreman, spots and chases him. When Natalie accidentally falls from a tree, her screams attract her father, Jack, and his girlfriend, park ranger Grace Meacham. Pete tries to run away, but Gavin, Jack's brother, accidentally knocks him unconscious. After realizing that Pete has vanished, Elliot stumbles around looking for him and ends up knocking over a tree near the lumber camp, leading Gavin to organize a hunting party to find him. Meanwhile, Pete wakes up to find himself in a local hospital, which he escapes in an effort to return to the forest. Before the police can catch him, Grace finds Pete and convinces him to come live with her by promising to take him to the forest the next day.

Gavin and his men locate Elliot's treehouse, but when they try to search it, Elliot reveals himself and scares them away. He then follows them back to town in an effort to find Pete. When he does, however, and finds Pete settling in with Grace's family, he leaves. After receiving a drawing of Elliot from Pete, Grace takes it to her father, who claims to have discovered the same dragon as a young man. He advises her to trust Pete, and to find Elliot.

A simple family drama that involves a dragon. Faith, trust and believe are the true values implied especially in a comunity filled with different ideas and greed. It also somehow reminded me of Tarzan. Well, it truly resembled Tarzan but Pete has Elliot and not the jungle animals. Overall an entertaining movie to watch with the family.