MPOV: Alice Through the Looking Glass 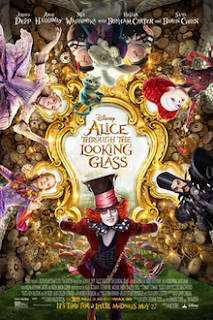 Alice Kingsleigh has spent the past three years following in her father's footsteps and sailing the high seas. Upon her return to London from China, she discovers that her ex-fiancé, Hamish Ascot, has taken over her father's company and plans to have Alice sell him her father's ship, "the Wonder" in exchange for her family home. Unable to make a choice, Alice runs away, and comes across her butterfly friend Absolem, who disappears through a mysterious mirror in one of the upstairs rooms, returning to Underland.

There, Alice is greeted by Mirana of Marmoreal, the White Queen, Nivens McTwisp, the White Rabbit, the Tweedles, Mallymkun, the Dormouse, Thackery Earwicket, the March Hare, Bayard, and the Cheshire Cat. They inform her that Tarrant Hightopp, the Mad Hatter is in poor health because his family is missing following the Attack of the Jabberwocky. The attack occurred shortly after his father, Zanik, a hat retailer, seemed to reject Tarrant's gift of a hat creation.

The White Queen persuades Alice to convince Time himself to save the Mad Hatter's family in the past, believing her to be the only one who can save the Hatter. However, she cautions Alice about time, and that if her past self sees her future self, everything will be history. As Alice sets out, she ends up in a dreary castle, where Time himself, a demigod that is part-human, part-clock, resides. As Alice tries to consult Time, she finds the Chronosphere, an object that powers all time in Underland and will allow her to travel to any time in the past.

As magical as always, I've enjoyed the unique settings, elaborate costumes and entertaining plots. Loving the intricate designs of everything, so thoroughly thought of and truly magical. It made me wished I am Alice LOL! Anyway, it was good in my books but it could have been better. At some point, it did felt a little slow... overall, ok lah.