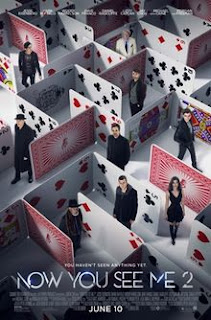 One year after outwitting the FBI, the remaining members of the Four Horsemen—J. Daniel Atlas (Jesse Eisenberg), Merritt McKinney (Woody Harrelson) and Jack Wilder (Dave Franco)—are in hiding, awaiting further instructions from The Eye, the secret society of magicians they've been recruited into. Atlas, having grown tired of waiting for a mission, seeks out The Eye himself. His search leads him to an underground tunnel in which he hears a voice that tells him that his wait may be coming to an end. The Horseman handler FBI agent Dylan Rhodes (Mark Ruffalo) ultimately assigns them a new mission, exposing corrupt businessman Owen Case (Ben Lamb), whose new software secretly steals data on its users for Case's benefit. Lula (Lizzy Caplan) is added to the team to replace former member Henley Reeves (Isla Fisher), who has left the Horsemen.

The Horsemen hijack the launch party for the new software but the show is interrupted by a mysterious individual who reveals to the world that Wilder, believed to be dead, is actually alive, and that Dylan Rhodes is their mole, forcing Rhodes to escape. While escaping, the Horsemen enter their escape tube on a roof and emerge in Macau, where they are captured by mercenaries and Chase McKinney (also played by Woody Harrelson), Merritt's twin brother. The Horsemen are then brought before Chase's employer, technology prodigy Walter Mabry (Daniel Radcliffe), Case's former business partner who faked his death after Case stole Walter's company. Mabry conscripts the Horsemen into stealing the data-mining device developed by Case to prevent Case from using it. The chip allows the user to decrypt and access any electronic device around the world. Atlas agrees to steal the device and contacts The Eye to arrange the device handover once stolen. Meanwhile, Rhodes is branded a fugitive and forced to spring his rival Thaddeus Bradley (Morgan Freeman), whom Rhodes blames for the death of his father, out of jail for help.


The Horsemen infiltrate the facility and steal the chip. Atlas is then confronted by Mabry, revealing that Atlas had been fooled into thinking that Mabry was The Eye. Rhodes intervenes and pretends to retrieve the device but is captured by Mabry's forces and taken to a nearby yacht where he learns Mabry is acting on behalf of his father, Arthur Tressler (Michael Caine), the businessman whom Rhodes employed the Horsemen to expose in the first film. Tressler places Rhodes in a replica of the same safe that his father died in and leaves him to drown, but Rhodes escapes. After the rescue, the Horsemen find that the chip they had stolen appears to be a fake.

I can't remember the first one but I do remember how exciting and mesmerizing it was. This was still as intriguing and captivating but a little slow at times. Overall it was still an exciting movie to watch. I was entertained especially during those unique magical acts... definitely illusion at it's best! Of course, some may have been over played but still as entertaining and enthralling! Not sure if there's a third installment but I sure hope they up their illusion/ magic game :-) Also maintained these talented casts!