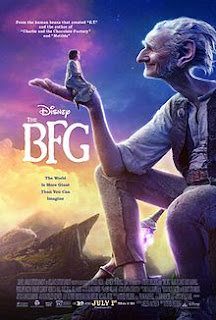 Sophie, a ten year old orphaned girl who lives in a London orphanage stays awake reading through the nights due to her insomnia. At 3:00 AM, or what she calls the "witching hour", she sees an elderly giant outside her window. The giant captures her and takes her into Giant Country. There, he explains that he named himself the "Big Friendly Giant" or the "BFG" for short and that Sophie must stay with him for the rest of her life because she saw him and must not be allowed to reveal the existence of giants. After learning that she has insomnia and that she doesn't believe he can control dreams, he manages to read her to sleep and gives her a nightmare about failing to escape and being eaten by another giant.

When Sophie awakes, the Fleshlumpeater, the infantile leader of the man-eating giants, enters the BFG's home and smells Sophie. The Fleshlumpeater nearly devours Sophie before exiting the BFG's home. The BFG gives Sophie some replacement clothes, as hers are ruined, and Sophie convinces the BFG to take her to Dream Country to catch dreams together. As they leave, they accidentally wake up the Bloodbottler, who alerts the other man-eating giants of the BFG's presence. They torment and bully the BFG. As the pair escape during a thunderstorm which repels the man-eating giants, Sophie tells the BFG that he shouldn't allow the other giants to bully him. Meanwhile, the Fleshlumpeater and the Bloodbottler find Sophie's blanket (which she had dropped before) and set out to look for her.

The pair arrives in Dream Country and catch a dream each. The two then head to London to spread good dreams to sleeping children. As they do so, Sophie realizes that she has lost her blanket. The BFG realizes that the other man-eating giants know about her, and she wakes up outside the orphanage. He explains that the last human child he took and raised was discovered and eaten by the other giants. She throws herself out of her window in the hope he will appear again to catch her, and he does. When they return to the BFG's home, the other giants barge in and upend the place looking for Sophie, destroying much of the BFG's hard work. Sophie evades detection and the enraged BFG finally stands up to them and drives them off with a hot fire iron while using water on Fleshlumpeater.

This movie is slow paced from the start and only picked up pace towards the end after BFG met the queen. Overall, it was entertaining though a little difficult to get by the unique slang hence it could be boring to some. The animation was beautiful and realistically intertwined with the real world. Truly an amazing movie though it is a bore for most of the initial part. I've not read the storybook so I can't compare it with the movie.