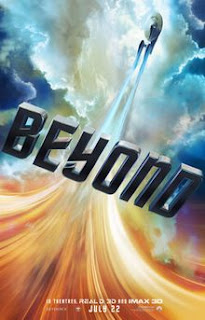 Three years into its five year mission, the USS Enterprise arrives at Starbase Yorktown, a massive space station, for resupply and shore leave for her crew. Struggling to find continued meaning in the endless nature of their mission of exploration, Captain James Kirk has applied for a promotion to Vice Admiral and commanding officer of Yorktown. He recommends Spock as the new captain of the Enterprise. Meanwhile, Hikaru Sulu reunites with his family, Montgomery Scott works to keep the ship operational, and Spock and Nyota Uhura amicably end their relationship; Spock also receives word from New Vulcan that Ambassador Spock (Spock's future self from the original timeline) has died.

The Enterprise is dispatched on a rescue mission after an escape pod drifts out of a nearby uncharted nebula. The survivor, Kalara, claims her ship is stranded on Altamid, a planet within the nebula. The rescue turns into an ambush when the Enterprise is quickly torn apart by a massive swarm of small ships. Krall and his crew board the ship, and unsuccessfully search for a relic called an Abronath that Kirk had obtained for a failed diplomatic mission. Krall captures and removes many crew members from the ship. Kirk then orders for the crew to abandon ship as the Enterprise's saucer section hurtles towards the planet.

On the planet's surface, Sulu, Uhura, and other survivors are captured by Krall. Kirk and navigator Pavel Chekov, accompanied by Kalara, locate the wrecked saucer section. Kalara is discovered to be Krall's ally when she tries to retrieve the Abronath. To escape Krall's soldiers, Kirk activates the still-functional thrusters, causing the saucer to lurch forward, crushing Kalara. Meanwhile, a wounded Spock and Dr. Leonard McCoy search for other survivors. Spock confides to McCoy that he intends to leave Starfleet to continue the late Ambassador Spock's work on New Vulcan. Meanwhile, Scott is rescued by Jaylah, a scavenger who previously escaped Krall's encampment. She takes Scott to her makeshift home, the grounded USS Franklin, an early Starfleet vessel reported missing over a century earlier. Scott is reunited with Kirk, Chekov, McCoy, and Spock. Using the ship as a base, they plot to raid Krall's camp and transport the crew to the Franklin, then escape the planet in the repaired ship. Meanwhile, Krall coerces Ensign Syl to hand over the Abronath that she had kept hidden for Kirk. The Abronath is the missing half of an ancient bioweapon, created by the planet's original inhabitants which can disintegrate any humanoid. With the device complete, Krall intends to attack Yorktown and kill its inhabitants, and, using its advanced technology, go on to attack the Federation. Kirk and the others free the crew as Krall launches into space with the bioweapon, leading his drone fleet to Yorktown.

Captain's Log, Stardate 20161013
This is definitely, by far, my all time favourite! The script, the cast, the CGI... all blew me away! There was high, there was low but one thing's for sure, it kept me on toes! I so love Jaylah's make-up and her acerbic tongue LOL! Also Yorktown - so, so, so beautiful!

An amazing, adventure movie which had me thinking... if only I was able to travel like them... into the Nebula System, Deep Space Nine or even along the Milky Way! By the time this technology has evolved, I think I would have been too old or dead. With Elon Musk and Richard Branson still planning the trip to Mars, it would take a very long time for this whole space traveling thingy to come true.

It's sad looking at Chekov aka Anton Yelchin since he has passed on due to a freak accident but he's truly a good actor. Will definitely missed this character in the sequel. Yes, a sequel i.e. fourth film is in the making with most casts back and a few new ones like Chris Hemsworth! Can't wait for it!


Space, the final frontier. These are the voyages of the Starship Enterprise. It's continuing mission to explore strange new worlds, to seek out new life and new civilization, to boldly go where no one has gone before...

As the Vulcans would say... Live long and prosper!