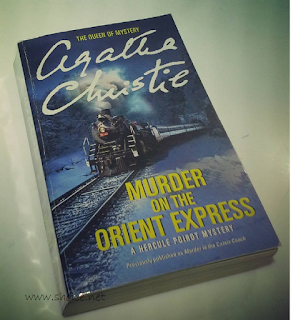 Believe it or not, this is my FIRST Agathe Christie's book! All thanks to the recommendations I've received from fellow KLBAC members and I am on the right track too with this title. I've always watched Hercule Poirot on the telly when I was young. Reading this book definitely reminded me of David Suchet, the actor famous for his role as Hercule Poirot.
The book started of with Poirot taking the Orient Express, heading straight to London. Unfortunately, due to the snow storm, the train had to stop unexpectedly in the middle of nowhere. One night, there were many unexpected events leading to the discovery of a murder. As they were stranded, his friend and owner of the train, Bouc, has requested Poirot to take on this murder case and hoping it can be resolved ASAP.

I liked the way the story progresses, a very straightforward prose and the methodical way Agatha has laid out to solve this case. Similar to Sherlock Holmes, she used the theory of deduction to solve this murder case. How she twisted and turned the findings, eventually solving it. I was taken with it at the end as I was curious of the findings and who WERE the murderers... who did it?

I can so imagined David Suchet in the movie, acting his part and solving the murder. As it's relatively smooth, I just didn't feel the highs and lows of the mystery. I guess I was so used to the thrill settings of a mystery hence the anticipation. However, it's replaced by the curiosity... the engaging discussions which eventually led to Poirot's assumptions and closing of the case.

New words for me:
Elucidation - clarification
Exigencies - an urgent need or demand

Also just learnt this tip for toothache:
'I applied a little oil of cloves, sir, which relieved the pain a little, but I was still not able to get to sleep.' says the valet, Edward.