MPOV: The Legend of Tarzan 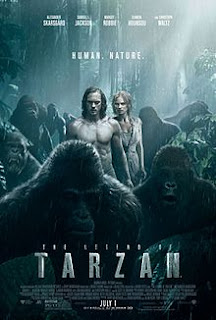 As a result of the Berlin Conference, the Congo Basin is claimed by King Leopold II of the Belgians, who rules the Congo Free State in personal union with the Kingdom of Belgium. The country is on the verge of bankruptcy, Leopold having borrowed huge amounts of money to finance the construction of railways and other infrastructure projects. In response, he sends his envoy Léon Rom (Christoph Waltz) to secure the fabled diamonds of Opar. Rom's expedition is ambushed and massacred, with only Rom surviving. A tribal leader, Chief Mbonga (Djimon Hounsou), offers him the diamonds in exchange for an old enemy: Tarzan.

The man once called "Tarzan", John Clayton III, Lord Greystoke (Alexander Skarsgård), has long since left Africa behind and settled down in London with his American-born wife, Jane Porter (Margot Robbie), and has taken up both his birth name and ancestral family residence. In the eight years since returning from Africa, Lord Greystoke's story as Tarzan has become legendary among the Victorian public, although Lord Greystoke himself wishes to leave the past behind him. Through the British Prime Minister (Jim Broadbent), he is invited by King Leopold to visit Boma and report on the development of the Congo by Belgium, though Greystoke politely declines the invitation. An American envoy, George Washington Williams (Samuel L. Jackson), who recognises John from the stories of "Tarzan", privately reveals to him that he suspects the Belgians are enslaving the Congolese population, and persuades him to accept the invitation in order to prove his suspicions. Jane is disappointed when John tells her that she cannot come, as he believes the trip to be too dangerous, remembering how both his parents died as a result of the jungle's brutality following their shipwreck there - his mother of disease and his father later killed by the Mangani apes - leaving the baby John to be raised as Tarzan by his Gorilla "mother" Kala and "brother" Akut. However, Jane reminds him that she grew up in Africa as well, and misses her home. John relents, and allows Jane to accompany him.

John, Jane and Williams take the trip to the Congo. There, the trio encounters a tribal village and villagers who knew John and Jane during their stay in the jungle. Jane explains to Williams that her husband was once considered an evil spirit by the African tribes, including that of Chief Mbonga. She recalls how, when she was younger, she and her father lived in the tribal village helping to care for local children. There she met Tarzan (made feral and physically enhanced by his life with the apes) who shielded her from a vicious gorilla attack, saving Jane's life but being severely injured in the process. Jane took the injured Tarzan home, nursed him back to health, and the two fell in love. That night, as the tribe sleeps, Rom and his mercenaries attack the village and kidnap John and Jane and kill the tribe's leader. They then escape to a nearby steamboat with Jane and several of the tribe's members, but Williams is able to rescue John before he can be taken to the boat.

This fabled tale has been retold in many versions but this is by far the most honest yet direct take on Tarzan, of his difficult transition from jungle to city life and his moving forward in life. It's more humane, more realistic but I find that Alexander was a little too stiff at times as Tarzan but eventually warmed up to the character in the end. They couldn't have cast a much better Jane. Margot was so realistically feisty and fits the character up to the nines! I truly enjoyed the dramatic events in the movie especially since it touched the most important life issue i.e. slavery.

Action wise, I like the swinging Tarzan! So fluid and free! It made me wish I could be as daring and free as Tarzan :-) Anyway, it's an impressive movie to watch if you want something heavy to digest with the historical background.