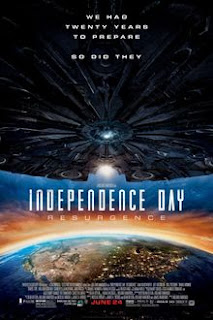 Twenty years after a devastating alien invasion, the United Nations has set up the Earth Space Defense (ESD), a global defense and research program to reverse-engineer alien technology and serve as Earth's early warning system against extraterrestrial threats. The main defense force utilizes equipment salvaged from the remains of the alien forces and operates military bases built on the Moon, Mars, and Rhea. The Area 51 base in Nevada has become the ESD Headquarters.

The world is preparing to celebrate the twentieth anniversary of their survival after the invasion. In the provincial African state Republique Nationale d'Umbutu, ESD Director David Levinson meets with Dr. Catherine Marceaux and warlord Dikembe Umbutu, who lead him to an intact alien destroyer. Aboard the ship, they discover that the alien occupants sent a distress call to their home planet before being defeated. Furthermore, Umbutu, former U.S. President Thomas Whitmore, and Dr. Brackish Okun (who awakens at Area 51 after a twenty-year coma)—all of them once telepathically linked with the aliens ever since their personal encounters with the aliens—have of late been receiving strange visions of an unidentifiable spherical object.

An unidentified spherical ship, with a technology different from that of the aliens who attacked 20 years earlier, emerges from a wormhole near the ESD's Moon defense headquarters. Levinson believes that it belongs to another extraterrestrial race that might be benevolent and urges the world's Security Council not to attack, but they vote to shoot it down regardless. Against ESD's orders, pilots Jake Morrison and Charlie Miller pick up Levinson, Marceaux, Umbutu, and Levinson's accountant Floyd Rosenberg on a space tug, and they head for the wreckage, where they recover a container. An alien mothership 3,000 miles (4,800 km) in diameter suddenly emerges and destroys Earth's planetary defenses before approaching the planet. The space tug is caught in the mothership's gravitational pull, which lifts objects from across Asia. The debris falls all over Europe, where the tug manages to escape before heading on to Area 51. The mothership lands over the north of the Atlantic Ocean, destroying cities on the Eastern Seaboard, and begins drilling a hole through the bottom of the ocean floor to harvest the Earth's core for fuel, which will destroy both its magnetic field and atmosphere in the process, killing all life.

To be honest, it was a bore for me with not much excitement to keep me on my toes. The first one was way better. This one tried to be as good as the first but somehow it fell short for me. It felt flat and they were trying very hard to be as enthralling. Unfortunately, the only part that touched me was when the building collapsed with the good doctor which was Dylan's mom and how harrowing it was for Dylan to watch her fall to her death. Anyway, there could be a possible sequel but not confirmed yet. They definitely have to up their game to be better than this.