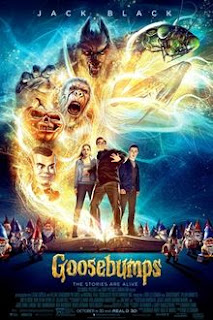 Zach Cooper and his mother Gale move to the town of Madison, Delaware. While settling in, Zach meets his new neighbor Hannah and her overprotective father "Mr. Shivers". Zach and Hannah become quick friends, but Mr. Shivers warns Zach to stay on his side of the fence. At Madison High School where Gale works as the vice-principal, Zach befriends Champ, a socially awkward student. Later that evening, Hannah comes to Zach and takes him to an abandoned amusement park out in the woods where they watch the sun set together on top of the Ferris wheel. When they get back home, Mr. Shivers appears and again warns Zach to stay away from them or something bad would happen.

The next night, Zach hears Mr. Shivers and Hannah arguing, followed by Hannah screaming and something crashing. Zach calls the police, but Mr. Shivers assures the officers that the noise came from his television. Fearing Hannah is in danger, Zach tricks Mr. Shivers into going to the police station for further questioning and breaks into his house with Champ's help. The two find a shelf containing many Goosebumps manuscripts, all of which are locked. Frustrated by Champ's curiosity, Zach unlocks one of the books. When Hannah discovers them, Zach drops the book, releasing the Abominable Snowman of Pasadena. They pursue the Abominable Snowman to an ice skating rink, where Mr. Shivers appears and imprisons it back into the book.

On the way home, Mr. Shivers reveals that he is Goosebumps author R.L. Stine. He created the stories as a child to terrorize the people that made fun of him, but the monsters came to life and became uncontrollable, so he trapped them in the manuscripts. Returning to the house, they find Slappy waiting for them. Angry at being imprisoned, Slappy burns his own manuscript and flees with the others in The Haunted Car. They are attacked by the living lawn gnomes from "Revenge of the Lawn Gnomes". When Stine and the kids try to smash them, each of the gnomes reform, making them realize that they can only run away.


Category: A 2015 American horror comedy film based on the children's book series of the same name by R.L. Stine
Email ThisBlogThis!Share to TwitterShare to FacebookShare to Pinterest
Sections: Movies