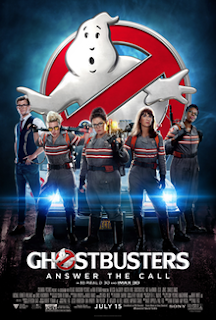 Physicists Abby Yates and Erin Gilbert are co-authors of a research book which posits the existence of paranormal phenomena such as ghosts. Gilbert has disowned the work and become a professor at Columbia University, while Yates continues to study the paranormal at a technical college with eccentric engineer Jillian Holtzmann. Gilbert learns Yates has republished the book, threatening her bid for tenure at Columbia. She reunites with Yates and, in exchange for Yates removing the book from publication, reluctantly agrees to assist her and Holtzmann in a paranormal investigation.

The group witness a malevolent ghost, renewing Gilbert's belief in the paranormal. However, a video of their investigation is posted online, and Gilbert is denied tenure. She joins Yates and Holtzmann's project, but when a new institute director learns its nature, he fires them. They open an office above a Chinese restaurant and call themselves the "Conductors of the Metaphysical Examination." They build equipment to study and capture ghosts, and hire dimwitted but handsome Kevin Beckman as a receptionist.

MTA worker Patty Tolan witnesses a ghost in a subway line and contacts the group. They document the ghost and successfully test Holtzmann's proton containment laser, but their findings are again dismissed. They continue to develop their technology and advertise their services as what pundits have dubbed the "Ghostbusters". Tolan joins the team, providing historical knowledge of New York City and a repurposed hearse, "Ecto-1".

TBH, after reading many bad reviews, I didn't have much hope for it. However it did surprised me. Firstly, it's a comedy so it definitely tickled my funny bones!

Secondly, I honestly do not know why there were many bad reviews. Well, it's a comedy... same like the old one. It's all female instead of male... so, any difference? Revamped storyline... as expected since this year is 2016.

Well, whatever it was... all I can say the movie was really entertaining and funny to boot. Especially Chris' character! He's so 'dumb blond' and nonchalant about it! It's just a comedy fiction film to entertain us poor souls and they definitely did that as I was thoroughly de-stressed!