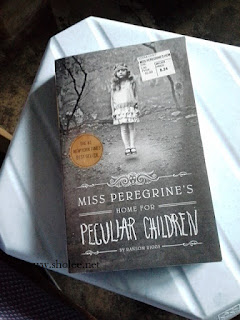 This book follows the story of a young, troubled boy who always felt left out and alone. He's been longing for an adventure and to move far, far away from his current home. Growing up, Jacob has always been closed to his grandfather, who had been filling him with lots of his past adventures with photos to proof it. As Jacob grew older, he has stopped believing in his grandfather, thinking it's just fairy tales and the photos were doctored.

One day, his grandfather went berserk and Jacob had to go over to calm him down. As he entered the chaotic house, Jacob sensed something was a missed and later found his grandfather gravely injured in the forest nearby. As his grandfather passed away in his arms, Jacob saw something in the dark bushes but no one else saw it. When the police arrived, Jacob told everyone what he saw but they dismissed him, assuming that Jacob has had a big shocked with his grandfather dying in his arms.

His parents have assuaged him with a psychiatrist, hoping that Jacob could recover from his grievances. However, he has found ways to deceive the psychiatrist and his parents. Also, he has found some new clues linking his grandfather to a deserted island in UK. He was able to visit this island on the pretext of helping his father with the bird photography project and also be allowed to get over his grief. Upon reaching this island is where Jacob's adventure begins and recovering the truth behind his grandfather's stories. With his new found friends, they began a new chapter and embark on a fascinating, peculiar journey.

I have always been fascinated with the cover of this trilogy. Yes, I'm a sucker for unique, attractive covers so even if it was not made into a movie, I'll still get the book eventually when the price is right. It is peculiar, dark yet intriguing. Finally, with the first book in my hand, I had an interesting time uncovering all the peculiar photos in the book! Honestly, it's the photos that maketh the book!

It's written in an easy to understand manner since it's for the young adults in mind. Hence it is slow at times and a little muffled for me. The plots were somewhat predictable but it's the peculiarity that makes it different. The story brew slowly but surely and peaked midway, but flat lined a little towards the end. It may be exciting to some but I was not totally taken by it. I guess the transition to book 2 wasn't as smooth and it had me thinking so the effect was lost on me.

What I loved most were the authentic, vintage photos that accompanied the stories. Hence my assumption, the photos maketh the book! It's like a few creative and artistic murals, all dropped into written plots! Ransom did a good creative job here! FYI, initially I thought him to be a female author *grinning awkwardly*

An easy read, I sure hope the movie adaption coming soon will do the story more justice with all the advance technologies and CGIs! I am waiting patiently now for book sales to get Hollow City and Library of Souls LOL!