MPOV: A Beggar at the Gate (Mariana Givens #2) 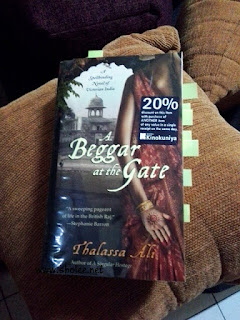 This book is basically about a white woman's life adventure in India. Mariana is a vibrant and brave young British woman who loves learning and venturing into the new world. She was unintentionally betrothed to a rich widowed Muslim Punjab, Hassan, as his people believed that she could save his clairvoyant son, Saboor, from being misused by their ruler. Both she and Saboor left Lahore the next day after her wedding and returned to her uncle's Government House in British Calcutta. As mixed marriages were abhorred way back then, she has to endure the resentments from the higher British officials and was looked down upon by those around her.

After 2 years, an opportunity arrived for her uncle to be transferred to Afghanistan. During this journey, Uncle Adrian coerced Mariana into divorcing Hassan so they had detoured to Lahore to dissolve this marriage. However while waiting for Hassan's agreement to dissolve their marriage at Qamar Haveli, Mariana has unwittingly fallen in love with her husband. Many obstacles came in between Mariana and Hassan, with their future unsure but would their love prevail?


Finally finished reading this beautifully plotted book, with an unexpected ending, making me wished there's more! Upon reaching the end, I actually felt 'hanging' as though I have yet to read the actual happy ending. It was an interesting read, though some fillers were relevant, some made it too lengthy and unnecessary. Other than that, I loved the historical setting in India and how Thalassa has explored the history, language, religion and believes of the people back then. Her straightforward prose made it easy to grasp and imaginably a good historical love story.

The best part, I've just realized this is book 2 about Mariana Givens. The story plot was definitely seamless as I didn't know there's book 1! A Singular Hostage is when Mariana first met Hassan and how they were betrothed. So should I look for book 1 and start reading backwards LOL?

Some new words I've picked up:
Ablution - the act of washing oneself
Whirligig - a toy that spins around
Mendicant - given to begging
Caparisoned - be decked out in rich decorative coverings
Ingratiate - bring oneself into favour with someone by flattering