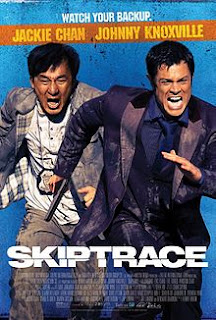 Hong Kong detective Bennie Chan (Jackie Chan) has been tracking notorious crime boss Victor Wong for over a decade. When Bennie's young niece Samantha/bái shū (Fan Bingbing) gets into trouble with Wong's crime syndicate, Bennie must track down the only man who can help him: fast-talking American gambler Connor Watts (Johnny Knoxville). Bennie races against the clock to bring Connor back to Hong Kong and the unlikely pair embark on an entertaining and perilous adventure from the snowy mountains of Mongolia to the windswept dunes of the Gobi desert.

Overall, an entertaining movie with the usual Jackie Chan's slapstick comedy but with a slower paced action scene. The plots were also nothing new... same old, same old... predictable too. Usually it's logical but this time there were illogical scenes like when Samantha was ambushed at her home, the aquarium broke and water spilled. However, she was able to use the taser to electrocute/shock her assailants who had their shoes on in a puddle of little water??? Definitely didn't make sense for me. There were some irregularities but then... I just had to lower my expectations to enjoy the movie. Well, it was still entertaining overall hence the higher rating - more for the laughing factor :-)