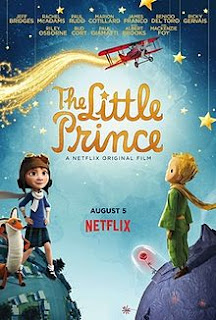 An ambitious mother undertakes to enroll her daughter into prestigious Werth Academy, imposing a life plan that leaves little time for leisure. The Little Girl however becomes distracted by an elderly retired aviator who tells her the story of "The Little Prince", whom he supposedly encountered in the Sahara after crash-landing. After asking the aviator to draw him a sheep, he – lacking skill – eventually draws a box and says that there's a sheep inside, satisfying the Little Prince.

The two read and play together without the mother's knowledge. The aviator tells the Girl about the Prince's home, "Asteroid B612", which is covered in baobab sprouts. After some time clearing away baobab sprouts, the Little Prince notices a different plant and nurtures it until it grows into a rose. The rose becomes his friend, but the Prince leaves due to her selfishness, eventually landing on Earth. He then finds and tames a red fox, which later says goodbye to the Prince but tells him to always see with his heart. The Little Girl keeps a stuffed fox as a gift/ She then discusses the ending, with the aviator telling her that he will leave to see The Little Prince.

The duo decide to go for free "birthday" pancakes. Possessing no license, he is then pulled over and the Girl is returned home. Angrily realizing this, her mom imposes harsher learning. After reading the last pages of the book, the Little Girl secretly visits the aviator to finish the story, which ends with the Prince succumbing to a snake bite to reunite with the rose. The aviator expresses belief of the Prince's return, but the Little Girl is upset by the story's dark ending and regrets the story and aviator.

I have always loved the animation of this novella though I;ve not read it before so when I chance upon this movie, I just had to watch it. Sure enough, it was a lovely animation with easy to understand story line especially for the young ones with all the positive messages. It's so true and poignant that it reflected on the spot of the current behaviour of most high expectation parents.

Kids will be kids... they need to learn, fall and pick themselves up. We can't spoon feed them everything! Life will be meaningless if we kept spoon feeding them. We should guide and nurture them from afar... let them judge and decide on their own. It's very important or they will end up growing to be obnoxious, clueless and brainless.

Definitely a recommended movie to watch with the family. Now I'm looking forward to own a copy of this book :-)