MPOV: The Greatest Game Ever Played 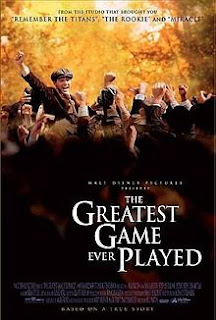 Set mainly in 1913, the film is about Francis Ouimet, the first amateur to win a U.S. Open. Amateur golf in that era was then a sport only for the wealthy, and Ouimet came from an immigrant family that was part of the working class. Ouimet watches an exhibition by legendary British golf pro Harry Vardon (Stephen Dillane) as a 7-year-old boy, and becomes very interested in golf. He begins as a caddy at The Country Club, a posh enclave located across the street from his home in suburban Brookline, Massachusetts, while making friends with the other caddies. He works on his own golf game at every chance, and gradually accumulates his own set of clubs. Francis practices putting at night in his room. He wins the Massachusetts Schoolboy Championship.

One day, a Club member, Mr. Hastings, asks Ouimet to play with him over The Country Club course, where caddies have almost no access of their own, and he shoots a fine round of 81 despite a 9 on one hole. His talent, composure, and good manners earn admirers and interest. With the help of Mr. Hastings and the Club Caddiemaster, Francis gets a chance to play in an upcoming tournament, the U.S. Amateur, the local qualifying for which is to be held at the very same Country Club course. However, his father Arthur (Elias Koteas) tells his son to quit golf and get a "real job". Ouimet needs $50 for the entry fee, and so agrees to get a real job and never play golf again if he could not qualify; his father lends him the money. On the 18th, Francis faces a three-foot putt that would secure him a spot in the championship, but he looks over and his father is watching. Ouimet is distracted, misses and falls one stroke short of qualifying for the championship proper.

With much jeer from the rich folk, Ouimet, now 20, fulfills his promise to his dad and works at a sporting goods shop, while continuing to live at home. After some time with his golf forgotten, Ouimet is still at the bottom of the working class. But one day, the president of the United States Golf Association enters the store and personally invites him to play in the upcoming U.S. Open. After some maneuvering and consideration from his employer, Ouimet secures entry. His father informs Ouimet that he must find his own place to live after the tournament; Ouimet agrees. However, his mother has been supportive of his golf from the start.

A nice and subtle memoir, capturing the intense moments of Francis' initial turmoil in amateur golf. He was so talented but back then, working class people were not encouraged to participate in such tournaments which are meant for the wealthy. Hence his father opposed to his golfing, didn't want Francis to be disappointed in life especially with the 'rich and poor castes'. But his mother supported him so in the end, he has to endure the jeers and rough patches when he joined the tournament again. However, this time, he was ready :-)

I've always enjoyed watching memoirs as opposed to reading it, not sure why, especially when it was portrayed so truthfully and real. This is truly an eye-opening movie, so much so that I really felt motivated and now hoping for my dreams to come true. Shia did a very good job as Francis... I definitely preferred him in this movie rather than Transformers :-p