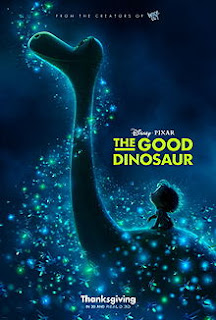 In an alternate universe, the asteroid that would have caused the extinction of the dinosaurs 65 million years ago passes safely over Earth.

65 million years later, Apatosaurus farmers Henry and Ida have children Libby, Buck, and the runt Arlo, who has trouble adjusting to farm life. While his successful siblings are allowed to "make their mark" (a mud-print on the family's corn silo), Arlo's timid nature makes even simple tasks difficult for him. Henry attempts to give Arlo a sense of purpose by putting him in charge of guarding their silo, and helps him set a trap. It captures a feral caveboy, but Arlo doesn't have the heart to kill him, and sets him free. Disappointed, Henry takes Arlo to track the caveboy, leading them into a ravine. Henry saves Arlo from a flash flood before being swept away and killed.

Without his father, Arlo shoulders more of the workload. He spots the same caveboy inside the silo and, blaming him for his father's death, chases him until both fall into a river. Arlo cannot swim, and is swept downstream where he hits his head on a rock and knocked unconscious. Awakening, he finds himself far from home and tries to survive on his own, but becomes trapped when a boulder pins his leg down. The next day Arlo wakes to find his leg has been freed, and the caveboy appears with food for him. The caveboy then leads Arlo to a berry tree, where the caveboy fends off a large snake, amazing Arlo and impressing a nearby eccentric Styracosaurus who wants to keep the boy. He forces Arlo to compete with him to give the boy a name he will respond to, which Arlo finally wins when he calls him "Spot". Arlo and Spot bond as Arlo laments his lost family, and Spot reveals that his own parents are dead. When a thunderstorm strikes, Arlo runs away in fear and loses the riverbank he has been following home.

A heart-warming movie of a little dinosaur, Arlo, who had to grow up after losing his father and family. Together with Spot, a caveboy who was inadvertently involved in his father's death, they ventured on an unforgettable adventure where they became friends and learning to cope in the wilderness themselves. Especially for Arlo as he has to overcome his fears and eventually became a very independent dinosaur.

A very nice animation with good intentions which are great for children to pick-up and learn. Truly fun to watch with the family.