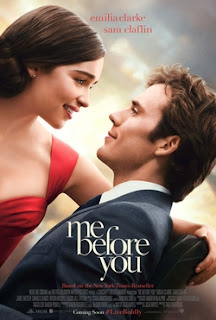 Louisa Clark must find a new job after being laid off from a café. She finds work as a caregiver for Will Traynor, a cynical former banker who was completely paralyzed by a motorcycle accident two years prior. At first, he reacts coldly to her spunkiness, but they soon become friends and develop feelings for each other, even though Louisa has an unthoughtful, marathon-running boyfriend named Patrick.

Louisa learns that Will has given his parents six months before they must bring him to Switzerland for euthanasia. Will cannot deal with the pain and suffering of his disability. Louisa secretly makes it her mission to change his mind and takes him on all the adventures that she can to prove that life is worth living. However, at their final trip to Mauritius with Will's nurse Nathan, Will confesses he intends to follow through with the euthanasia and asks for her to accompany him.


She is heartbroken and does not speak to him the rest of the trip. After they arrive home, she goes to Switzerland to see Will in his final moments. After his death, he bequeaths her enough money to continue her education and instructs her to "live well".

I've read the book more than a year ago and upon watching this movie, I can still recall the poignant moments from the book and parts that have been left out of the movie. I understand that they can't have everything from the book encapsulated into the movie but there are parts which I wished it was in the movie. They have adapted most of the important parts and changed a little bit for some that makes sense.

Emilia and Sam made a beautiful pair, so realistic that I truly thought of them as Lou and Will. Their love story may not be as perfect but it is for me. Like I've said before, I had my closure with the ending when I read the book and after a while, I didn't think of reading After You. After You is the second book pertaining Lou's life after Will has left this world. I just didn't want After You to spoil it some how. However, after watching the movie, I am now ready to read After You.

Overall, the movie did seemed a little rush at some points and also little dense. Not sure if it's the intention but it can be overlooked. I loved Lou's clothes actually... though quirky but uniquely fashionable! With superb acting and great songs to accompany it, it's a lovely sad movie to watch. Thankfully, I've only used 3 pieces of tissue and not the whole box! LOL!

Btw, an after thought, it's just a story and not based on someone real although Dignitas does exists and Jojo Moyes did her homework before writing this book. Also Will is a human being, though fiction, and he has the right to choose for himself. In life, there are always 2 choices, either left or right. And if you are lucky, you could have many to choose from. With that said, either choices is never right or wrong. It is the consequences you will have to live with whichever way you choose. Just opened up your mind, your heart, your soul... nothing lasts forever ya... just respect the choices made. He deserves it. You only live once so please, live your life to the fullest! This is life... make love, not war.