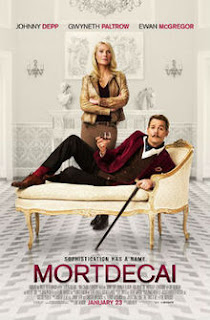 Lord Charlie Mortdecai, an unscrupulous art dealer and swindler, is accosted in Hong Kong by one of his victims, a gangster named Fang. Jock, Mortdecai's faithful manservant, extricates his master before they can be killed by Fang's gunmen. They return to London, where Mortdecai and his wife, Johanna, consider ways to pay off their crushing debt. A painting by Francisco Goya becomes the target of an elaborate theft which results in the murders of an art restorer and one of the thieves. Inspector Alistair Martland is put on the case. Martland, who has been in love with Johanna since college, asks Mortdecai to assist him. Martland believes the prime suspect to be Emil Strago. Mortdecai agrees to help in exchange for 10% of the insurance money.

Mortdecai interviews people affiliated with the art world, including Spinoza, an art smuggler and another of Mortdecai's victims. While they argue, Strago arrives and shoots at them, killing Spinoza; Mortdecai and Jock escape unharmed. Johanna meets with a man known as The Duke, who knows the thief and says that the painting conceals the location of a hoard of Nazi gold. Mortdecai is kidnapped by thugs working for a Russian named Romanov. Romanov and Strago think that Mortdecai has the painting. Romanov threatens torture unless Mortdecai surrenders it, but Mortdecai escapes through a window and Jock spirits him away.

Martland, wanting to be alone with Johanna, sends Mortdecai to America to meet with Milton Krampf, a potential buyer for the Goya. Mortdecai plans to sell his beloved Rolls-Royce to the American, and uses the opportunity to see if Krampf is involved with the theft. Arriving in Los Angeles, he discovers that the Goya has been hidden in the Rolls. Spinoza, in the employ of Krampf, stashed it there after stealing it from Strago, the original thief; Krampf planned to dupe Mortdecai into smuggling the Goya into the United States in his own car. He invites Mortdecai to a party that night, where Krampf intends to display the ill-gotten painting. Jock secretly proposes that he and Mortdecai steal the painting for themselves during the party. Krampf's daughter, Georgina, is secretly Strago's partner. She attempts to seduce Mortdecai while Strago steals the painting. Johanna arrives with Martland and catches her husband in a compromising position. Mortdecai flees the scene to help Jock steal the painting, but they find Krampf has been murdered by Strago and the painting is gone. Martland and Johanna capture Strago, but Georgina gets the drop on them, liberating her lover and the painting. Pursued by Mortdecai, Jock, Martland and Johanna, they hide in a motel where Strago intentionally sets fire to the Goya and the fire causes the explosion of the building. Johanna reveals that the painting was a fake; The Duke has the real one hidden.

Honestly, the trailer did not enticed me. The poster also turned me off. As my friends kept telling me it’s funny (they are huge Johnny Depp’s fans), I reluctantly watched it since Astro was showing.

I stood my ground; it was a horribly ridiculous movie! The plot was thin and comic-ly produced! When both Johnny and Gwyneth tried to be funny, it didn’t come across as slap-stick funny. When they tried to be serious at some point, they looked funny then... perhaps it's the British humour in the Americans that I didn't get.

I think more of the funnies were from Paul as he did looked and sounded funny in his serious and duh manner. The parts that I did enjoy were the beautiful house, artistic paintings and lavish gowns. Nothing else memorable in my books.