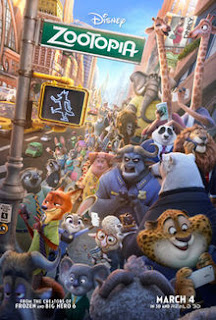 In a world populated by anthropomorphic mammals, Judy Hopps, a rabbit from the rural area of Bunnyburrow, fulfils her childhood dream of becoming the first rabbit officer in the police department of nearby city Zootopia. Despite graduating top of her class which was overseen by Mayor Leodore Lionheart, Judy is excluded from handling the top-priority missing predator cases, and assigned to parking duty by Chief Bogo, who doubts her potential. During one of her shifts, she meets Nick Wilde and Finnick, partners in crime.

Judy abandons her shift to arrest Duke Weaselton, a thief who stole what appear only to be onion bulbs, and is reprimanded by Bogo. When Mrs. Otterton arrives in his office pleading for someone to find her missing husband, Judy volunteers. Assistant Mayor Bellwether informs Mayor Lionheart of the news, Bogo reluctantly agrees to give her 48 hours, on the condition that she resign if she fails. She finds Nick and blackmails him into assisting her with the investigation by covertly recording his confession to tax evasion.

Judy and Nick determine that Otterton was last seen entering a limousine, the license plate number of which is tracked to Tundratown crime boss, Mr. Big. He informs the pair that Otterton, his florist, had "gone savage"—reverted to a feral state—and attacked his chauffeur, Manchas. Judy and Nick locate Manchas, who mentions that "night howlers" were responsible for Otterton's behavioral change. Soon after, Manchas himself goes savage and chases the pair out of his home. Judy calls the ZPD for help, but when Chief Bogo and his reinforcements arrive, Manchas is nowhere to be found. Bogo demands Judy's resignation, but Nick defends Judy, reminding Bogo that they have 10 more hours to solve the case. As the pair leaves, Judy learns from Nick that he was bullied as a kid for being a fox and subsequently became a con artist, believing that he would be stereotyped regardless.

The trailer was hilarious hence the desire to watch this animation when it has finally landed on Malaysian shore. Unfortunately, as it turns out, that IS the most hilarious scene!

Luckily, since it's a Disney animation, it has a good storyline with many exciting plots. So I was entertained from the start till the end. Also it's educational with good moral teachings for the young ones. Overall, it is a good movie to watch with the family.