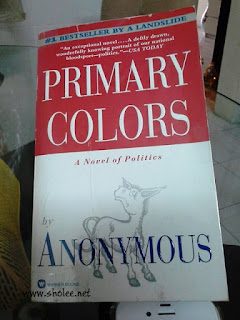 A brilliant and penetrating look behind the scenes of modern American politics, Primary Colors is a funny, wise, and dramatic story with characters and events that resemble some familiar, real-life figures. When a former congressional aide becomes part of the staff of the governor of a small Southern state, he watches in horror, admiration, and amazement, as the governor mixes calculation and sincerity in his not-so-above-board campaign for the presidency.

It’s either you like it or loath it. Unfortunately, it’s the latter for me as I discovered that political fiction is not my cup of tea. 3 chapters in and I began flipping through the pages. Alas, I didn’t continue with the 4th and just jumped to the last chapter for closure.

The only reason I bought this book was:
The story was told from Henry Burton’s point of view of his involvement in the campaign for Governor Jack Stanton. His regular liaison in this story includes Susan Stanton, Richard Jemmons, Howard Ferguson and his lover, Daisy Green. There were ups and downs as in any political campaigns involving sex, bribery and suicide. All in all, it’s fast paced with the story written as in a script format for me as I can imagined the scene of a movie.

Upon Googling only did I realized it was adapted into a movie before and I have seen it years ago :-p Well, watching it on the screen is a much better option for me instead of reading it. So I’ll just stick to the silver screen for political reads. I won’t provide any rating here as I didn’t finished the book, only read 4 chapters in total out of 9. If you are into politics so go ahead and pick this up.