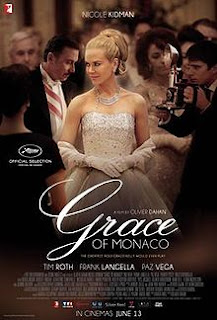 Grace of Monaco is focused on former Hollywood star Grace Kelly's crisis of marriage and identity, during a dispute between Monaco's Prince Rainier III and France's Charles de Gaulle in 1962 as well as her considering a return to Hollywood to film Alfred Hitchcock's Marnie.

I don't read memoirs but I love watching one LOL! Anyway, as claimed by the royal family, this is not a biopic though the movie makers said it is and taken from a distinct moment in Grace's time. Well, all in all, it is entertaining and I love how Nicole Kidman portrayed Grace Kelly. So classy, so feminine yet strong... girl power! I just didn't like at times how the camera zoomed in on Nicole's face scanning around... it felt so unnecessary and felt like stalking! Other than that, a fine fictionalised biopic movie to watch.