MPOV: To Kill a Mockingbird 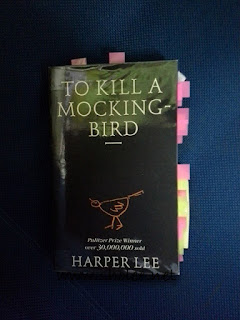 By the time I had finished, my book was fully labelled as there were so many new words and some typos which I wanted to point out. Not forgetting some interesting quotes which struck a chord with me.

Overall, it's a simple read about humanity, racism and a heroic father in the view of a young girl. Scout may be young but she understands life in a simplistic way thought by her father, Atticus, a lawyer. Together with her brother, Jem, they explored around their small town, played and roamed into their neighbours' without any qualms. Scout narrated how her life with her brother was, during school, after school and during the summer holidays including her fantasy about her neighbour, Boo Radley, who's a recluse and never leaves his house.

Until the day when their father was appointed to defend Tom Robinson (a black man), accused of raping Mayella Ewell (a white girl). Their lives were in turmoil and conflicted yet Atticus made it easy and simple for them, everything explained in black and white, no hidden agendas which made the children well aware of the situation they were in.

Atticus is truly an honourable and well-respected man with good values. I really admired how he handled each episode with fairness and understanding. The ending revealed how and why he did what he did. I really admire his integrity, his selflessness and his wisdom.

I felt the starting was filled with many big words and more complex prose until about 2/3 when it started to go easy with much better lines. As the whole book is narrated by a young girl, the slang may be suited well but not the dictionary. Perhaps Scout is well-educated but in the way Harper wrote it, it's a little more adult ways at some point.

The list of the new words I've discovered below:
Assuaged: to make something, such as an unpleasant feeling, less painful or severe
Brethren: used chiefly in formal or solemn address or in referring to the members of a profession, society of sect
Dictum: a statement or well-known remark that expresses an important idea or rule
Spittoon: a container that people spit into
Flivver: a small cheap usually old auto-mobile
Nebulous: not clear; difficult to see, understand or describe
Haint: [isn't in the dictionary]
Pizened: [isn't in the dictionary]
Pestilence: a disease that causes many people to die
Asinine: very stupid and silly
Collards: a cabbage related to kale and having a loose head of stalked smooth leaves
Philippic: [isn't in the dictionary]
Rectitude: the quality of being honest and morally correct
Palliation: to make the effects of something, such as an illness, less painful, harmful or harsh
Calomel: a white tasteless compound Hg2Cl2 used especially as a component of laboratory electrodes, as a fungicide, and formerly in medicine as a purgative

The above defined by Merriam-Webster.

Of course, well written is an understatement. It was easily understood which made it a light read yet with a heavy notion. No wonder it has and will be a favourite among most literature readers. The plot may be thin but it's the well-thought storyline in such beautiful prose that made it an all time favourite. 'As the moon draws water' like this book finally got my attention!

I was a little perplexed when the term Negro was used, a brazen referral, especially by Scout. But then, the whole book was direct about people categorization (and it still happens in current society) like the Ewells, Cunninghams, etc so it's no surprise of the usage of Negros/ niggers here. I liked that Harper did not beat around the bush.

Also Scout is a very smart girl yet easily influenced by the community with categorization/ racism. It was especially so with Walter Cunningham when he came over for a meal. Scout was blunt and rude about the way Walter ate. Thankfully Calpurnia, their maid, was there to guide her. In a way, she may seemed like a bully and spoilt but she's just like any other kids her age then. So it is like a breather for me that it is as real as it gets.

A couple of typos in my opinion:
The above were in Part 1. Part 2 is more of meaningful quotes like the below:

Atticus, when he was summing up the jury:


There's nothing more sickening to me than a low-grade white man who'll take advantage of a Negro's ignorance.

Jem's response to Scout's one kind of folks theory:

Atticus's response to Heck's verdict that Bob Ewell fell on his knife:


Before Jem looks at anyone else he looks at me, and I've tried to live so I can look squarely back at him... If I connived at something like this, frankly I couldn't meet his eye. And the day I can't do that I'll know I've lost him.

All in all, this is a really good book. For those who have not read it yet, if you like literature, go ahead and read one. You'll not regret it. 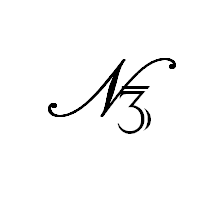