This is a newly opened Korean restaurant in Tropicana City Mall with a different twist. Normally you would have a huge bunch of vegetables and side dishes that accompanied the main dishes but there's only soup, salad and radish here. Also, there would have been a long hose of vacuum for ventilation but there's none here. It's just a big hot plate where the waiter will put all the meat and vegetables in and stir-fry it. 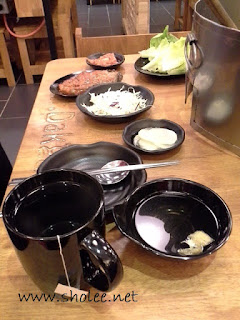 The only boohoo I didn't like was the stained side steel used to prevent the gravy from splattering at us. It was not cleaned after each use hence the stains build up and when I saw it, it's a little turned off for me. As we arrived near closing time, I noticed they did a clean up for all before closing using the table cloth. Yes, table cloth to wipe the tables, lagi turned off.

Thankfully, food was generally ok and spicy to boot. As the stir-frying time was short, we felt the squid not properly cooked. We were told to wrap it in salad for consumption and it was really nice. The coolness of the salad cooled down the spiciness so it's a nice crunchy blend. Other than that, a good sized portion for both of us and we didn't realized it was late hence we were rushing to finish it. We ended up packing the remaining half we can't finish :-)

Our total bill was inclusive of GST i.e. it has been absorbed, Seafood Dakgalbi (set for 2 pax) RM58 and 2 x Korean Green Tea RM2.90, amounting to RM63.80. It's expensive in my books but it's ok lah for a once in a blue moon treat plus a prompt service even though nearing closing time.