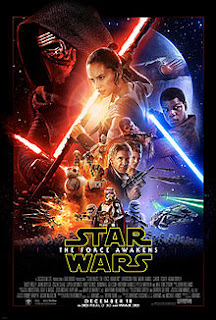 Approximately 30 years after the destruction of the second Death Star, Luke Skywalker, the last Jedi, has disappeared. The First Order has risen from the remains of the fallen Galactic Empire and seeks to eliminate Luke and the Republic. The Resistance, a military force backed by the Republic and led by Luke's sister, Leia Organa, opposes them while searching for Luke to enlist his aid.

Resistance pilot Poe Dameron meets with village elder Lor San Tekka on the planet Jakku to obtain a map to Luke's location. Stormtroopers under the command of Kylo Ren destroy the village and capture Poe. Poe’s droid BB-8 escapes with the map, and comes across a scavenger named Rey at a junkyard settlement. Ren tortures Poe and learns of BB-8. Stormtrooper FN-2187, unable to kill for the First Order, frees Poe and they escape in a stolen TIE fighter; Poe dubs FN-2187 "Finn". They crash on Jakku and Finn appears to be the only survivor. He encounters Rey and BB-8, but the First Order tracks them and launches an airstrike. The three flee the planet in a stolen, rundown ship, the Millennium Falcon.

The Falcon breaks down, leaving Finn and Rey stranded. They are found by Han Solo and Chewbacca, who reclaim their former ship, taking it aboard their freighter. Han explains that Luke tried to rebuild the Jedi Order, but after a student turned to the dark side and destroyed all that he had built, Luke went into exile, feeling responsible. Criminal gangs attack, but the five escape in the Falcon. However, the criminals inform the First Order of Han's involvement. The Falcon crew arrive at the planet Takodana and meet Maz Kanata, who can help BB-8 reach the Resistance, but Finn wants to flee on his own. Rey is drawn to a vault and finds the lightsaber that belonged to Luke and his father before him. She experiences a disturbing vision, and flees into the woods. Maz then gives Finn the lightsaber for safekeeping.

Firstly, I am not a Star Wars fan, right from the first movie itself Revenge of the Sith, but I'll definitely watched a good movie. Way back then, it was the early 80s and being shown on TV. I can't recall what my reaction was but I do know it was a weird, psychopathic science fiction with lots of laser beams LOL! Anyhow, it was good then for their standard of CGI and imagination. Also, being a Star Trek fanatic, this somehow incorporated into my mind of how aliens in the galaxy far, far away will look like. Oh yes, if given the chance, I would love to explore the universe!

Back to this movie, they have finally created a storyline to breakaway from the previous 6 movies. Slowly but surely, they were moving away from the Darth Vader/ Han Solo era. No spoilers here but it is definitely worth watching in the cinema. This is by far way much better than Anakin/ Amidala prequel. Also more action packed and excitement plus the new cutesy BB-8! I sure do like the ending... I wonder when will episode VIII be shown... in another 5 or 10 years time?

Lots of gaps though in this movie... perhaps that's their intention. There were some funnies but the funniest for me would have been when Kylo Ren removed his helmet! IMO, Adam Driver is not suited to be Kylo Ren! He just isn't lah... I was laughing non-stop when he tried to 'extract' the map from Rey's mind! So, so, so funny!

Also, all this while, Jedi's had always been male. I mean, from Anakin to Luke and then to Kylo but not to Leia.This time, it's a female and the best part she suddenly realised she has that power? It's like so naturally she could embraced it without feeling surprised. It makes me wonder who her parents are. Go watch it and you'll know what I mean...