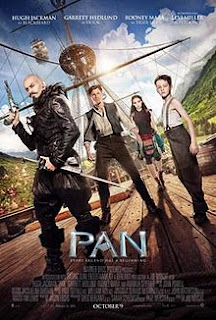 Peter (Levi Miller) is a young boy who is left as a baby on the steps of an orphanage in London by his mother Mary (Amanda Seyfried), an establishment under the care of Mother Barnabas (Kathy Burke). Several years later, during World War II, upon learning that she is hoarding food for herself, Peter and his best friend Nibs (Lewis MacDougall) try to steal it to distribute amongst themselves and the other orphans but they get caught. In the process, Peter finds a letter written by his mother, declaring her love and assuring Peter they will meet again "in this world or another".

In retaliation for the boys' mischief, Mother Barnabas summons pirates who kidnap Nibs and several others. Nibs managed to jump off the pirate ship and escape but Peter did not, he was captured and taken to Neverland, a magical realm beyond space and time, where he is forced to become a slave laborer and mine for fairy dust on behalf of the ruthless pirate Blackbeard (Hugh Jackman) who uses it to keep himself young. Peter befriends another miner, James Hook (Garrett Hedlund). After insulting Blackbeard's men, Peter is forced to walk the plank, but survives by flying above the water. Blackbeard then confides with him about an old prophecy that a boy who could fly would one day kill him, but Peter refuses to believe he is the said boy.

Peter joins Hook and his accomplice, Sam "Smee" Smiegel (Adeel Akhtar), stealing one of Blackbeard's flying ships and escaping into the forest, where they are found and nearly executed by the natives led by Chief Great Little Panther (Jack Charles), before his daughter, Tiger Lily (Rooney Mara), notices Peter's pan flute pendant, left to him by Mary, and said to belong to their people's greatest hero, the legendary Pan. Tiger Lily reveals that Peter's father was the Fairy Prince, but Mary incurred Blackbeard's wrath by rejecting his advances and was then forced to abandon Peter and seek shelter in the Fairy Kingdom. As part of his heritage, Peter has the ability to fly, but is unable to do so because of his lack of faith. Tiger Lily also lies to Peter by telling him his mother is alive so that he stays in Neverland.

Funny, never thought of Peter Pan and Captain Hook were friends before hand, pun intended. Well, it was nicely produced with interesting plots albeit a little slow at some points. Nonetheless, an entertaining movie to watch with the family. The casts were mostly unknown to me except for Hugh Jackman who reprised the role of Blackbeard efficiently and it was so real, I honestly didn't know it was him initially. Levi Miller who played Peter was innocently adorable! Thoroughly enjoyed the magical scenes especially the forest and Fairy Kingdom.