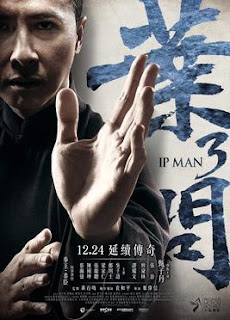 The film is set in 1959, when Ip Man is seen settling into his low-profile life in Hong Kong after decades of his struggle against feuding rivals and then Japanese oppressors during World War II.

This is the last movie of the year I've watched! And a truly great one at that! Lots of action mixed with a little dash of sadness made this movie splendid! Donnie Yen is much better and wiser in his portrayal as Ip Man especially after he knew his wife was dying of cancer. That was the most thought-provoking moment for me. Truly melancholic and it moved me to tears in the cinema! Gosh! Thankfully, this is just a trilogy and this movie being the finale is a superb one to end the year with a bang! Btw, Mike Tyson was funny in his role with some Cantonese speaking parts LOL! I guess he tried his best to act naturally but ok lah! Overall, a better movie from the previous 2 with a pretty good summation to end the trilogy.