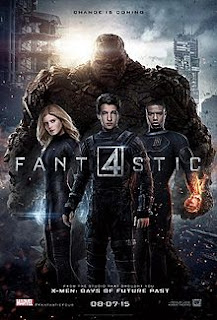 The experiment is successful, and the facility's supervisor, Dr. Allen (Tim Blake Nelson), plans to send a group from NASA to venture into a parallel dimension known as "Planet Zero". Disappointed at being denied the chance to join the expedition, Reed, Johnny, and Victor along with Ben use the Quantum Gate to embark on an unsanctioned voyage to Planet Zero, which they learn is a world filled with otherworldly substances. Victor attempts to touch the green-lava like substance, causing the surface they are in to collapse and the ground to erupt. Reed, Johnny, and Ben return to their shuttle just as Sue brings them back to Earth. Victor is left behind after he falls into the collapsing landscape. The machine explodes, altering Reed, Sue, Johnny, and Ben on a molecular-genetic level, affording them super-human conditions and abilities beyond their control: Reed can stretch like rubber, Sue can become invisible and generate force fields of energy, Johnny can engulf his entire body in flames and fly, and Ben becomes bigger and develops a rock-like hide which gives him enhanced strength and durability. They are then placed in government custody and confinement to be studied and have their conditions and abilities tested. Blaming himself for the accident, Reed escapes from the facility and tries to find a cure for their changes.

One year later, Reed, now a fugitive, is located in Central America by Sue and captured by Ben, who has become a military asset along with Johnny and Sue. Johnny and Sue have been outfitted with specialized suits, one of which Reed later receives, designed to keep up with their conditions and abilities and to help them stabilize, control, and contain their abilities. Reed is brought to Area 57, where Dr. Allen conscripts him to open another portal to Planet Zero in exchange for giving Reed the necessary resources to find a cure. Arriving in Planet Zero, Dr. Allen's explorers find Victor, who has been fused to his spacesuit and can now control the elements, as well as having telekinetic abilities, and bring him back to Earth. Believing the human race needs to be destroyed so he can rebuild Planet Zero in his image, Victor kills scientists and soldiers in the base including Dr. Allen and Professor Storm and returns to Planet Zero using the Quantum Gate, with Ben, Johnny, Reed, and Sue in pursuit.

Not sure why the review was poor but I find the movie was ok lah. Kinda slow at the start and picked up pace in the middle but it does feel like a superhero documentary hence the lack of excitement. Perhaps most comic enthusiasts would have preferred a more robust and action packed film instead of this documentary styled movie. Apparently a sequel is being planned and released in 2017 but not sure if they will proceed since it has bombed. Also the casts are new to me, so their acting skills were a little raw at times. I kept thinking of the previous 2005 movie with Jessica Alba, Chris Evans, Ioan Gruffudd and Michael Chiklis which has more action and excitement.