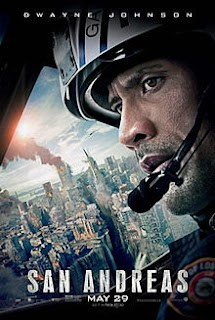 Raymond "Ray" Gaines (Dwayne Johnson) is a Los Angeles Fire Department Air Rescue pilot in the midst of a divorce from Emma (Carla Gugino) and planning a trip to San Francisco with his daughter Blake (Alexandra Daddario).

Meanwhile, Caltech seismologist Lawrence Hayes (Paul Giamatti) and his colleague Dr. Kim Park (Will Yun Lee) are at Hoover Dam doing research for a new earthquake predicting model when a nearby and heretofore unknown fault ruptures. This triggers a 7.1 magnitude earthquake that collapses the dam and kills Park.

When Ray is called into work because of this, Blake goes with her mother's new boyfriend Daniel Riddick (Ioan Gruffudd) to San Francisco, instead of Ray.

Action-packed, filled with so much excitement and a little drama here and there. Perfect dose of combination to keep me entertained throughout the movie! Oh well, who wouldn't when there's The Rock in it! Also the special effects were so damn real! It really made me cringe and yelped with fear!

At the end of the movie, I actually felt melancholy, thinking of the real disasters that had happened like the major earthquake which triggered a huge tsunami in 2004. The Indian Ocean earthquake with a massive magnitude of 9.1 that triggered a series of tsunamis that killed thousands of people on Boxing Day 26/12/2004. Who can forget that? How on earth could they have survived it all? How badly had they had suffered? Imagine their losses... Gosh, it made me felt more thankful for what I have, where I am and blessed to be alive.